The US Department of Justice said Friday it has proposed a rule change that will put bump stocks in the same category as machine guns. The change would be administrative, and would therefore not need congressional approval. 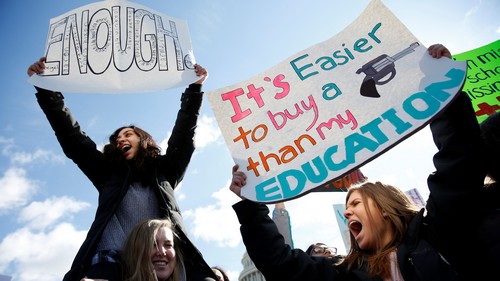 The Trump administration is moving to prohibit bump stocks, attachments that allow a shooter to fire a semi-automatic weapon faster.

The announcement, which was initially made via a presidential tweet, comes ahead of dozens of protests against gun violence planned for Saturday. Students across the country have been ratcheting up pressure for increased gun regulations in the aftermath of a mass shooting at a Florida high school. Among their demands was a ban on bump stocks.

The proposed change may signal their growing influence in the gun policy debate.

Attorney General Jeff Sessions said in a statement the ban “is a critical step in our effort to reduce the threat of gun violence that is in keeping with the Constitution and the laws passed by Congress.”

The Department of Justice, which he heads, had been reviewing whether to restrict bump stocks since last year, after another deadly attack in Las Vegas in October. The shooter in that incident used bump stocks to kill 58 people. Officials from the agency had said they didn’t think they could make any changes without Congress.

The proposed rule has to go through a 90-day comment period before being implemented.

Students who show up to the protests-dubbed March for our Lives-are unlikely to let up on their calls for tougher gun rules. They are also asking for universal background checks and high-capacity magazine regulations.

How Do Crypto Exchanges Select Coins, What Does It Take to Get Listed?