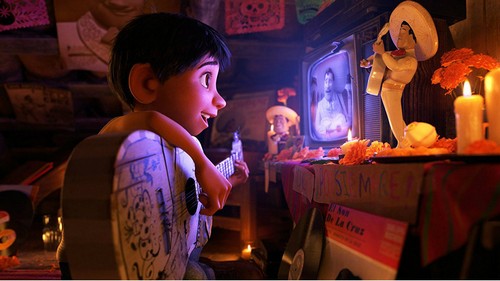 Coco, Pixar’s latest animated movie, beat two superhero films to top the US box office over Thanksgiving weekend. It could also become one of Pixar’s top-grossing films in China-a country where the studio has struggled to win over audiences.

That doesn’t make the film a bonafide blockbuster in China just yet-but it’s in the running to become one. Between Friday and Saturday, ticket sales for Coco jumped 270%, analyst Rob Cain noted for Forbes. By comparison, Disney’s Zootopia, which swept China’s box office when it hit theaters 2016, jumped 170% between its first Friday and Saturday in theaters. Coco also bested the opening weekend of Dangal, an Indian film about female wrestling that unexpectedly took China by storm.

Past Pixar films haven’t seen their global popularity matched in China, although Disney, Pixar’s parent company, scored a monster hit in China with Zootopia, which grossed $235.6 million in China. Pixar’s 2016 film Finding Dory, meanwhile, grossed $486.3 million worldwide, becoming the highest-grossing animated film ever, according to Box Office Mojo. In China, it generated $17.7 million on its opening weekend, about what Coco brought in. But in total it grossed only $38 million in China-less than one-third of what Universal and Dreamworks generated from their biggest animated hits in China, Despicable Me 3 and Kung Fu Panda 3, respectively. Coco’s Friday-to-Saturday jump and its stellar reviews on Douban, a Chinese movie-ranking site, suggest it’s poised to go much farther than its Pixar predecessors.

Cain argues that the Coco’s aspirational premise, involving a young boy who strives to become a musician despite his family’s disapproval, is resonating with Chinese audiences the same way that Zootopia and Dangal did with their underdog protagonists. In the former, a rabbit cop has to prove herself against the odds, while in the latter young women have to overcome patriarchal prejudice. Another thread of the Pixar movie may also be helping fuel its popularity, thought this story element could just as easily have led to censorship woes.

A large portion of the film involves the protagonist visiting his deceased ancestors, who take the form of skeletal ghosts. China’s State Administration of Press, Publication, Radio, Film and Television (SAPPRFT), which oversees Chinese media and directs censorship, has long forbidden movies featuring ghosts from reaching Chinese screens. Article 4 of regulations published in 2008 state that show “contents of murder, violence, terror, ghosts and the supernatural” must be cut or altered. SAPPRFT published similar regulations for TV series in 2015, banning content that “promotes spirits, reincarnation, witchcraft or other feudal superstitious thinking.”

These regulations reportedly prevented the Ghostbusters remake from getting released in China, along with Pirates of the Carribbean: Dead Man’s Chest, and perhaps the 2015 horror film Crimson Peak as well. With ghosts and supernatural ritual so central to Coco’s plot, it would appear to also violate SAPPRFT’s rules.

Yet as is the case with many such rules in China, uniform enforcement is rare. Resident Evil: The Final Chapter, a violent film full of zombies, managed to secure a China release earlier this year. The final film in the Harry Potter series also received wide release in China in 2014 (paywall). There are also plenty of other Chinese movies and TV shows that incorporate supernatural, ghost-like elements into their plot.

Cain writes that Coco’s plot line around the ghosts-the film emphasizes honoring one’s relatives-mimics elements of Chinese culture: “Just as Mexico has its Day of the Dead (Día de los Muertos), China has its Tomb-Sweeping Day, a holiday for revering one’s ancestors.”

Perhaps that’s also how the regulator saw it.