In the latest sign that bitcoin is becoming a mainstream financial asset, the iOS app for bitcoin exchange Coinbase is now the top trending search in the App Store.

Last week, friends and families across the U.S. gathered together to celebrate Thanksgiving. As in previous years, the subject of bitcoin was likely broached around many tables. However, unlike in previous years, the subject was not necessarily introduced by the resident bitcoin investor, and – perhaps for the first time – the other people at the table truly listened when he or she explained what has fueled the bitcoin price’s dramatic year-to-date increase.

Bitcoin was trading at a record level when the holiday arrived, but it has left that mark in the dust in the intervening days. Since Thanksgiving, the bitcoin price has risen approximately $1,600, perhaps in part due to new investors entering the market following those dinner table conversations. The effect of this grassroots bitcoin evangelism is impossible to measure, but this theory is supported by the fact that Coinbase has become the top trending search in the iOS App Store.

This phenomenon was discovered by a Reddit user, who posted a screenshot on the popular social media platform. As the picture below demonstrates, searches for Coinbase outpaced those for both reading app Hooked and home automation platform Wemo. Coinbase even beat out Hallmark Movies Now, the favorite streaming app of cinephiles who prefer their that their holiday movies be seasoned with a heavy dollop of kitsch. 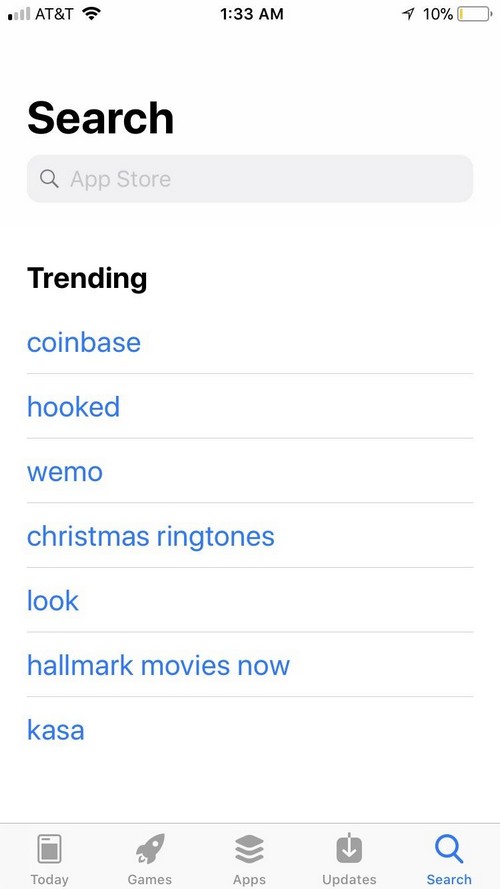 As CCN has reported, Coinbase has experienced incredible growth throughout the year. Widely considered to be the easiest way to onboard new users into the cryptocurrency ecosystem – at least while Square Cash’s bitcoin pilot program remains in beta – the company has been registering more than one million new users per month during the latter half of the year.

That said, the expansion has not come without growing pains. Customer complaints have surged, and the exchange website has gone offline on multiple occasions during periods of intense volatility. However, the company has made efforts to improve the customer experience, as evidenced by the addition of phone support and instant cryptocurrency purchases – features that have undoubtedly contributed to its swelling user base over the past quarter.