Bitcoin is the toast of the town, with prices closing in on the five-figure mark. At current prices, the rally has covered a huge distance in 2017. On January 1 of this year, bitcoin opened trading at $973.37. From there, to today’s intraday highs of $9749, bitcoin has returned an astounding 901.57% for its investors. While the forecasters are quoting huge numbers for the future, we believe that at the current prices, the risk to reward ratio is skewed to the downside in the short-term.

But, just because an asset class has risen quickly is no sign that it will fall. True. There are a few sentimental factors and a few technical factors that have led us to arrive at our conclusion.

We are not calling an end to the long-term rally

First, let us make it clear that we are not calling an end to the long-term rally yet. Calling a long-term top is a futile exercise, especially for a new technology like blockchain. Many forecasters have bitten the dust in calling a top in Amazon for about two decades. So, we shall not get into that exercise.

However, we are calling a short-term top in bitcoin. 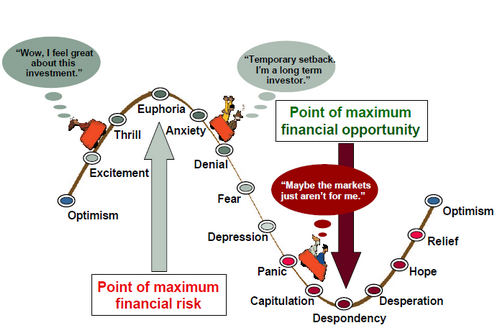 Exuberance is usually the final stage of the rally. Pick up any news on any cryptocurrency website and you will find forecasters dishing out astronomical numbers for bitcoin.

Agreed, there have been many recent developments across the globe that favor the blockchain technology and the existing cryptocurrencies. However, most experts in the field only talk about huge numbers without any caution about the volatility or a possible fall. Investors are being made to believe that the only way for bitcoin is up.

In a recent survey by LendEDU, a marketplace of private loans, bitcoin investors said that they will sell their positions if bitcoin neared $200,000 levels. While anything is possible in the markets, a price point that huge is unlikely to be reached within the next few years.

Such figures and astronomical targets are attracting new investors who are entering into cryptocurrency trading to make a quick buck.

Bitcoin futures trading by CBOE can be both good and bad

While most of the mainstream Wall Street has stayed away from bitcoin, it is unlikely that the introduction of bitcoin futures trading by the CBOE is going to lead to a stampede for initiating long positions.

Contrarily, we believe that few short sellers are likely to enter the fray and test the resolve of the bulls on the upside. At least for the first few days, after bitcoin futures trading starts, we may see an increase in volatility.

If the big players of Wall Street with deep pockets are able to overpower the bulls, then a fall is likely.

The chart structure points to at least a 30% correction

The reasons mentioned above are regarding trader psychology and they are debatable. Most of the die-hard bitcoin supporters are likely to put those to trash.

Hence, we put forth our finding from the charts that suggests a likelihood of a fall. 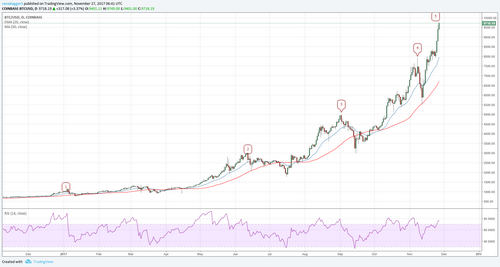 We have picked up the short-term tops in bitcoin in 2017 for our analysis. We have disregarded the dips that were arrested at the 20-day EMA and we have not considered the dips that happened without a material rally.

We have considered the intraday highs on the day bitcoin topped. For that day, we also took the value of the 50-day simple moving average.

We find that, all the short-term tops in the markets have started when the percentage difference between the price of bitcoin and the 50-day SMA was in the range of 35% to 39%.

The ensuing correction in the first three instances saw a dip of about 40%. The fourth and the most recent correction, however, was shallower at 30%.

As of November 27, the difference between the intraday high of $9749 and the 50-day SMA value of 6694.14 has already reached 37.15%. This difference is closing in on the higher end of the percentage value, which has led to a correction in the past.

Even if we take the minimum correction following the top, we shall see a 30% correction, which will sink bitcoin to around $7000 levels.

Risks to our assumption

We have assumed that the market participants are in a euphoric state, however, this is difficult to gauge. If the markets are only in the optimism stage of the bull run, it still has a long way to go.

We have taken the performance of bitcoin only in 2017. This is a small sample size. The current rally may just continue higher without giving a meaningful pullback.

While the debate on the valuation is never-ending, we believe that the current pace of ascent is looking euphoric in nature. As the proponents have benefitted by holding through every dip, there is a sense of security among the buyers that no matter what, price of bitcoin can and will only go up.

We believe that even if bitcoin has to rise, it will break this notion and test the long-term investors before embarking on a long-term uptrend. We, therefore, recommend trimming long positions in bitcoin in phases, instead of selling all at once. We expect a short-term top around the $10,000 mark. We believe the investors can buy bitcoin at lower prices in the next few weeks.

What Next for Cryptocurrency Miners?