Black Friday, the internet’s annual day for rampant consumer excess, is looming. On November 24, an online spending spree the likes of which hasn’t been seen since the last one, and which won’t been seen till the next, shall commence. As Black Friday’s profile has risen in recent years, so has that of its sister event, Bitcoin Black Friday. But with many cryptocurrency owners choosing to hodl rather than spend, will this year’s BFF be a damp squib? 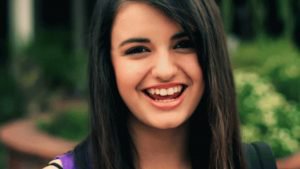 Black Friday is on its way.

On Thursday November 23, Americans celebrate family and food by gathering their nearest and dearest and piling their plates high. The following day, the U.S. – and increasingly the rest of the world – fire up smartphones, tablets, and laptops, and load up on Black Friday bargains. Traditionally its been the credit card that’s borne the brunt of the strain, but for the past few years bitcoin has also been an option.

Bitcoin Black Friday was launched by crypto enthusiast Jon Holmquist in 2012, initially as a means of raising awareness of bitcoin. By his own admission, the cryptocurrency has been doing just fine in the awareness stakes of late; most people with the capacity to shop online have at least heard of bitcoin. For owners of the cryptocurrency, however, many of whom have seen their portfolio double, triple, or even 10x in value this year, parting with those precious coins – even for an event as monumental as Bitcoin Black Friday – is a big ask.

For this year, BFF’s founder has welcomed all cryptocurrencies into the fold, writing “While the title of the event is still Bitcoin Black Friday, I think other digital currency communities should be able to participate.” Jon Holmquist told news.Bitcoin.com:

The goal for this year is simply to provide a fun event for the Bitcoin community to participate in and support merchants who accept digital currencies. One extremely important change this year is that BBF, irregardless of the name, is now currency agnostic. If a merchant only accepts Bitcoin Cash, they can be listed.

So for those comfortable with the idea of splurging some satoshis on discounted gear, what sort of bitcoin bargains are there to be had?

Just some of the discounted wares at Spendabit.

Spend a Little with Spendabit

Bitcoin shopping aggregator Spendabit specializes in rounding up products that can be purchased with bitcoin. It currently lists over 400 stores and several million products. On Friday November 24, the site will be launching a new section detailing vendors offering bitcoin-only discounts. (To entice merchants to be listed on the site, Spendabit is also offering its own Black Friday subscription deal.) 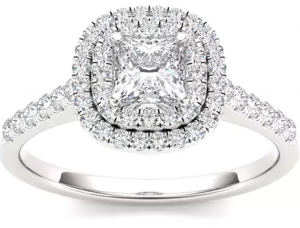 There are also various bitcoin-friendly stores running Black Friday promotions including Overstock, where there are flash deals on everything from engagement rings to orthopedic dog beds. Elsewhere, Etsy (which has an entire section of bitcoin members) is running Cyber Week promos that include key rings, art, Xmas decorations, clothing, and accessories. To pay with BTC, select “Other” as payment method at checkout and then contact the seller to complete the process.

Gamers, meanwhile, can avail themselves of various Black Friday deals at Steam, including 55% off Dying Light and up to 80% off Steam Controller games. Don’t forget to check out the deals being offered by smaller stores too, many of which are listed at Spendbitcoins.com. Finally, if all this talk of spending has gotten you in the mood for a spot of retail therapy, we’ll finish by rounding up some of the best bitcoin merchandise to be found on the web. In the absence of a copyright holder to protect the brand, hobbyists and entrepreneurs have been free to do what they like under the bitcoin banner. The results are invariably bizarre, creative, and amusing.

As crypto clobber goes, this tee scores an easy 9.8 on the geek scale. One for the true neckbeards.

And here’s a slightly less esoteric version for the next generation of bitcoiners: 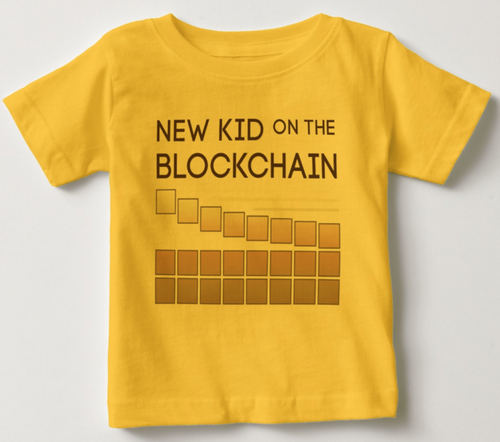 Real Men Control the Keys to Their Bitcoin Wallets

And so do real women. This retro poster would sit beautifully above the tri-screen battlestation you use to monitor your crypto bags in real time.

The internet is awash with apparel referencing all your favorite bitcoin memes from “To the moon” tees to “Hodl me” pacifiers, but r/bitcoin’s magic internet money is still one of the best. Encase your laptop in this painstakingly designed sleeve. Over 9,000 hours in MS Paint. 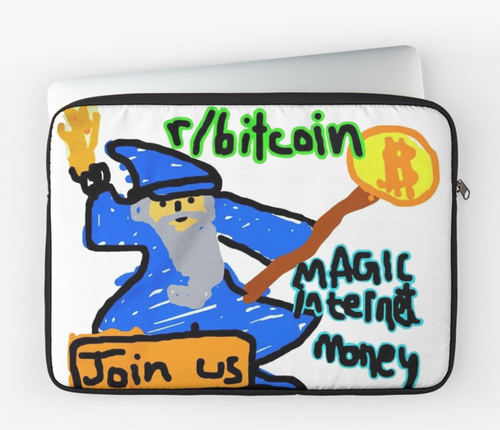 I Survived the Bitcoin Crash

It was painful at the time but at least we can laugh about it now. Here’s hoping we don’t have to issue a 2018 version of this tee.

One for the bitcoin bears. Who wants to send a tee to Jamie Dimon?

Show your devotion to the Church of Satoshi by wearing the bitcoin bible on your chest.

If Kanye West and The Rock can toy with running for president, why not Satoshi? Sure, we don’t know if he’s a he, or a single entity, or an American citizen, or even alive, but let’s not allow such trifling details to spoil the sentiment of this fine apparel. 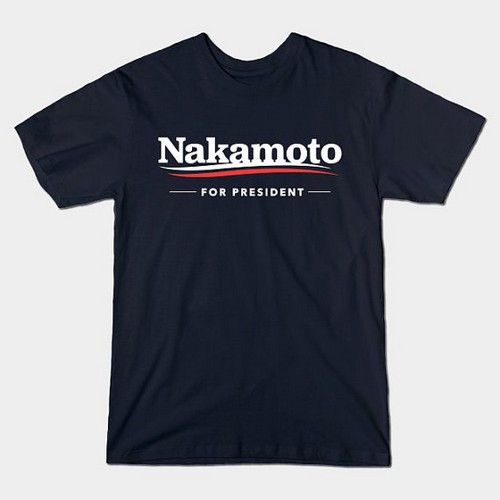 The Cult of Satoshi

The mysteriousness of Satoshi inspires some truly weird and wonderful artwork. Often it’s not so much the imagery as the underlying concept that causes the mind to boggle. This Etsy effort depicts “the spirit of Satoshi Nakamoto hurdling over the moon on his epic honey badger mount carrying trophies of the world’s vanquished fiat currencies”. Obviously.

Just because you’re a crypto minnow doesn’t preclude you from larping like a bitcoin whale. The Bitcoin Empire Card Game allows you to “build your cryptocurrency empire and sabotage your opponents”. It’s basically trading without the pain of having your 1,000 BTC short liquidated. One to play with all the family around the table after Christmas lunch. 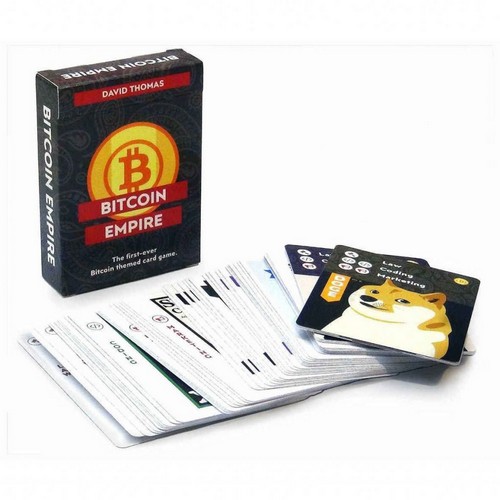 Finally, All Things Decentraland’s cryptoart section is a rabbit hole of lost productivity that will mesmerize and distract you for days.

Many of the sites featured here accept payment in bitcoin and other cryptocurrencies, but there are plenty of other places on the web where your satoshis are good. There’s even a Crypto Pet store that takes bitcoin, litecoin, dash and, of course, doge. The world of bitcoin merchandise is a strange one indeed, but the cryptocurrency community would be all the duller without it.

Whatever happens on Black Friday, bitcoin holders should be able to sleep easy. It wasn’t always that way, as Viacoin dev Romano points out:

As one Twitter user put it, “It’d be great if for #BlackFriday and #CyberMonday we could buy Bitcoin discounted like everything else”. Now there’s an offer that all bitcoin newcomers could get behind.