Bitcoin barely gained any traction on its latest bounce and is setting its sights back on the longer-term support levels. Price is still inside a falling wedge pattern seen on the 4-hour and daily time frames, possibly aiming for another test of support.

Applying the Fib extension tool on the pullback shows that the 38.2% level lines up with the swing low around $6,100 and the 61.8% level is closer to the earlier lows at $5,800. Stronger selling pressure could take it down to the 78.6% extension at the bottom of the wedge or the full extension just below $5,300.

The 100 SMA looks ready to cross back below the longer-term 200 SMA to confirm that bearish pressure is in play. Price is also below the moving averages, reflecting the presence of selling momentum.

RSI is pointing down and has room to head lower before indicating oversold conditions, so there may be some selling energy left for more declines. Stochastic is also moving south, so bitcoin might follow suit, but this oscillator is close to dipping to oversold levels. 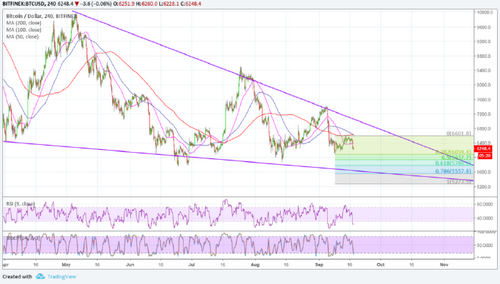 Cryptocurrencies are back in the losing end as risk aversion hit general financial markets. The US officially imposed another round of tariffs on China, further escalating trade tensions. These tariffs are set to take effect on September 24 and would be increased from 10% to 25% by the end of the year.

This dashes hopes that trade talks could be pursued, erasing the optimism from the previous week. Traders are dumping their riskier higher-yielding assets like cryptocurrencies in favor of safe-havens instead.

So far there seem to be no major headlines dragging bitcoin price lower, so there might still be a chance that bulls continue to defend long-term support zones. A break, on the other hand, could encourage more sellers to join in and accelerate the slide.

How is Bitcoin Taxed?

Why Ethereum (ETH) Is Well Placed to Tokenize Securities