One of the biggest issues of the crypto market as we know it is the lack of regulation.

It’s great to see that some new companies are able to sidestep the traditional finance industry and raise large amounts of seed money in an ICO but of course, many people are taking advantage of this and using this new market to create scams for tokens that may not have any value at all.

The real problem though, is what happens after a worthless token is created. Many times these new tokens become prime targets for pump and dump schemes, which are being perpetrated shamelessly by groups like the “PumpKing Community” on the Telegram app.

I recently had the pleasure of working with Oscar Williams-Grut from Business Insider UK, who put together an excellent article explaining all about it.

Please note: All data, figures & graphs are valid as of November 14th. All trading carries risk. Only risk capital you can afford to lose.

It’s quite common these days for a country to borrow more money than they could ever conceivably payback. For example, the US Government now owes more than $20 Trillion to other countries and private investors. That doesn’t usually become a problem as long as they can pay back the service payments on these loans. When you’re a country, you generally have more freedom to borrow.

Think of it like this, the bank allows you to borrow money in order to purchase a home that costs $20 Million. When giving you that loan, they take a minimal downpayment of $250,000 and largely ignore the fact that it will take you more than 300 years to pay off the full amount. In fact, the only thing they look at is your ability to pay off the monthly mortgage bill of $2,500.

The United States is in no immediate danger of defaulting on their monthly payments but it seems that Venezuela just did.

A month ago, they ran into trouble paying off $200 Million of debt-servicing but they were granted a 30 day grace period to pay up, which has just expired. The most likely situation now is that their investors will remain patient, hoping and praying that they’ll get their money back. There is also a chance though that they will band together and demand payment, in which case things could get pretty ugly.

The main thing to watch is the price of crude oil. State owned Venezuelan oil companies are currently contributing about 6% of OPEC’s oil. So if they’re unable to keep the pumps running, there will be a significant drop off in supply from South America.

“The oil supply coming from Venezuela has been declining lately, but if the country goes into default, it will be extremely difficult for them to even meet their reduced quotas.”

The price of oil is already pretty high at the moment, so it will be interesting to see how this saga plays out over the next few days.

Just as I’m writing to you, I can see a few charts that have been moving pretty quickly. The reason for the move is still not clear to me but the moves themselves are strong enough to comment on.

There are a few breakouts in some currency pairs but none of them really seem to be connected. Here’s a graph from Finviz that has a good overview. 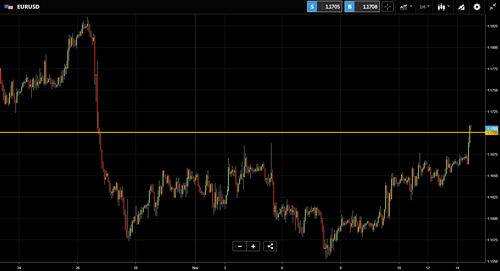 The Yen is falling, with the USDJPY breaking out above 113.70… 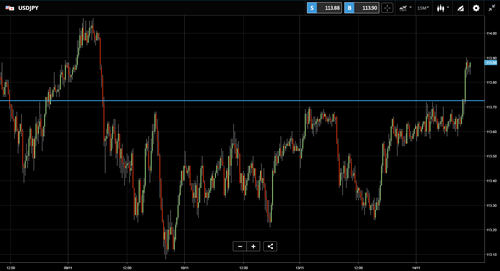 The New Zealand Dollar is the worst off from this violent swing but take a look at Gold touching $1270 an ounce before rebounding. 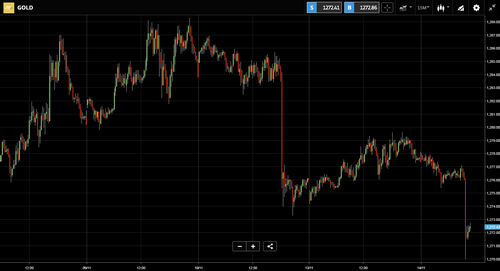 …but the coolest part of all this is that we might finally have a breakout in ETHEREUM. We’ve been tracking this triangle pattern for a while now. In the last few hours, the upper line of the pattern is getting a serious test… 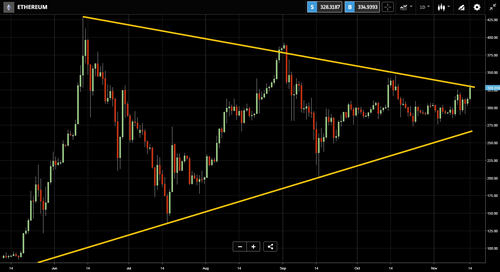 With all the excitement in the crypto markets lately it’s nice to see ETH finally joining the party, fashionably late as usual. The move may also have something to do with some new upgrades that are being planned on the network that will move away from high electricity mining to a better system known as PoS.

All eyes and ears are on the big central bank meeting in Frankfurt. Guest speakers will include Mario Draghi, Janet Yellen, Mark Carney, and Haruhiko Kuroda. These four people have more influence over global money flows than anybody else in the world right now.

Numbers have been good lately, really good. Economic growth and employment numbers in most of the developed world have been surpassing expectations and thanks to copious amounts of money that the central banks have injected into the system, stock markets are at record highs.

At some point, possibly soon, the central banks will want to start tightening up the money by raising interest rates and reducing the amount of cash injections.

No doubt we’ll hear a lot of grandiose statements and self back patting from the quartet. Try and see past that. The markets want to know about policy going forward. Sure the “economy is doing great” but what do they intend to do about it. Will they put their money where their mouth is and start to get aggressive?

Will Japan ease off their money printing? Will Europe start signalling that they’re ready to give up on negative interest rates? Let’s see if they come up with a central theme about where things are going, then we can really see the markets start to move.

Have an awesome day ahead!