The market for initial coin offerings (ICOs) has skyrocketed this year, as token sales became the preferred method of raising capital for the bustling startup community. Now, a new research study by Funderbeam has quantified just how quickly the market has matured.

ICO funding has risen more than 1,000% this year to reach $2.8 billion, according to Funderbeam’s latest report. The report showed that the average round sizes have reached $19 million. 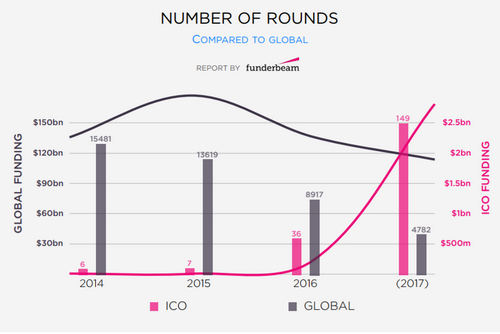 The total number of ICO rounds also shot up to 149 from a total of 36 last year. That’s still a fraction of the 4,782 rounds generated by global startup funding rounds. Combined, global startup rounds have generated in excess of $35 billion.

North American and Asian ICOs have seen the largest inflows on a per-round basis. In 2017, the average ICO round size was $31.5 million, compared with $30.7 million in Asia. Europe saw an average of $16.7 million. What’s more, ICOs have overtaken early stage and Series A funding. Only Series B+ and debt issuance remain higher.

In total, North America generated $1.2 billion in ICO funding, Europe $637 million and Asia $338 million. The rest of the world has seen $45 million flow into ICO projects this year. 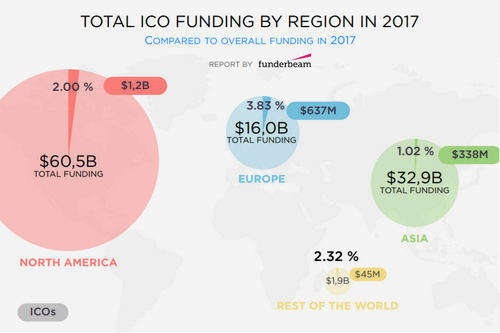 As the chart above demonstrates, ICOs make up the largest share of European funding at 3.83%. That figure is as low as 1.02% in Asia and 2% in North America.

Research from Coinschedule last month showed ICO funding reached $3.25 billion in the year to October, with September seeing an inflow of more than $800 million.

Funderbeam helps market participants find high quality investment opportunities through a database of more than 150,000 companies and investors. The platform has 19 tradable syndicates currently in operation.

The size and growth rate of the ICO market has been a major focal point for most of 2017. However, what is less certain is how the crowdfunding model will be regulated. A contentious debate about what actually constitutes a security token has made some businesses think twice before issuing their ICO.

In the United States, the Securities and Exchange Commission (SEC) has made it abundantly clear that it will regulate ICOs deemed to be security tokens. Although a large majority of ICOs are designed for utility, the SEC isn’t just taking the company’s word for it.

A security token is said to include equity or some other kind of investment return. The DAO is one of the of more prominent examples of a security token that was later found to be in violation of SEC rules. The company generated over $150 million in 2016 before the SEC ordered it to be shut down.

Despite the regulatory uncertainty, at least the SEC is prepared to entertain the concept of token raises. Jurisdictions such as China and South Korea have issued bans on ICO, citing investor safety concerns.