Segwit wallet integration has been bumped to the top of Bitfinex’s to-do list, with an exchange staffer declaring that the job should be completed next week. Despite the scaling technology having been available since August, a number of exchanges have dithered. Now, there are signs that progress is being made in activating BIP141.

Segregated Witness, as it’s officially known, has been available on the bitcoin network since August 24, and has been activated for certain altcoins such as litecoin and digibyte for much longer. After the backwards-compatible network upgrade locked in, Segwit transactions began to show up on the bitcoin blockchain. This number grew to 10% of all transactions within the first week of October, but has since fallen. 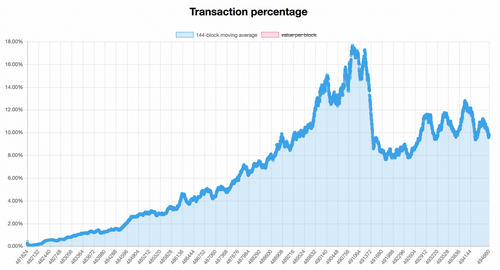 The percentage of all bitcoin transactions that use Segwit.

The blockchain has grown increasingly congested of late, culminating in fees reaching an all-time high last week, when the mempool filled with over 130,000 unconfirmed transactions. While not everyone in the bitcoin community is enamored with Segwit, it is hard to assess the technology’s efficacy until it has been widely rolled out. Various wallet developers have been Segwit-compatible for weeks, but exchanges haven’t been so quick off the mark. Kraken and Blockchain are among the major players that are still Segwit-less. 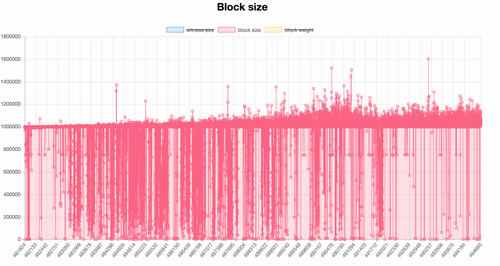 Bitfinex is one of the world’s largest exchanges, with a 24-hour trading volume of 96,000 BTC. In belatedly embracing Segwit, Bitfinex’ actions may spur other exchanges into following suit. Shortly after a Bitfinex staffer confirmed that Segwit activation was on its way, Amsterdam’s Deribit exchange signaled that it too was working on Segwit.

Due to a transaction malleability fix that is built into Segwit, more data can be squeezed into each block – theoretically raising the size from 1MB to around 1.8MB. Despite this facility, block sizes on the bitcoin network have been averaging around 1.1MB, showing that Segwit’s full capacity has yet to be utilized. The major absentee from the Segwit activation party is of course Coinbase. Were the Californian player to commit to the scaling technology, the number of Segwit transactions would shoot up.