Right now people keep hearing about the pending fork scheduled for on or aroundNovember 16. Because software forks and blockchain splits can be a confusing subject, we want to explain just what a fork is and what it means for all the network participants involved.

What is a Bitcoin Fork?

If you are just getting involved in cryptocurrencies, and you’ve done a little research, you might have read about the great scaling debate and the topic of bitcoin forks recently. Forks represent changes to the bitcoin protocol that make previous rules valid or invalid. Cryptocurrency forks are merely protocol upgrades, and there are two types of blockchain forks that bitcoin enthusiasts refer to: asoft fork and a hard fork.

Both types of forks can be radical changes to the underlying protocol, but they have two key differences. A soft fork is a rule change that is backward compatible; which means the new rules can still be interoperable with the legacy protocol.

In contrast to this method, a hard fork enables a rule change to the software, but it does not have backward compatibility. This means a hard fork is a permanent split from the legacy rule-set, or version, of the blockchain before the fork occurred.

The bitcoin blockchain has forked several times over the course of the technology’s existence. Bitcoin forked back in March of 2013, and a few months later in August 2013. Back then the ethereum creator, Vitalik Buterin, wrote a very vivid description of the March 2013 fork event, stating:

“Starting from block 225430, the blockchain literally split into two, with one half of the network adding blocks to one version of the chain, and the other half adding to the other,” explains Buterin.

For the next six hours, there were effectively two Bitcoin networks operating at the same time, each with its own version of the transaction history.

Just recently miners implemented the Segregated Witness (Segwit) soft fork this past summer. Another time the protocol forked was this past August 1st, during the bitcoin cash (BCH) split. 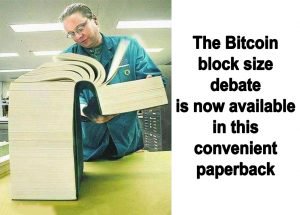 The most recent bitcoin forks occurring after 2013 have been tethered to the scaling debate. The scaling debate has been very controversial since the inception of the 1 MB block size limit back in 2010. This protocol change implemented by Satoshi, limits the number of transactions a block can hold. Currently, people believe bitcoin needs to scale to more people because the network has been experiencing intense congestion at times.

Because transactions are filling up blocks to the limit, this has caused the network fee rate paid to miners to increase exponentially. Prior to 2015, it used to cost around $0.01 per transaction or less, and nowadays fees can be upwards of $5-10 per transaction. In essence, transaction bottleneck has caused participants to outbid each other, raising fees to get their transaction confirmed faster, creating an upward spiral of higher fees. There have been many meetings and agreements between miners, developers, and businesses within the bitcoin community, but they have always failed to accomplish the goal of fixing scaling issues.

The thing about forks is they require consensus which means all or a vast majority of the network’s participants have to agree with the changes. The forks back in 2013 pretty much had consensus from everyone in the network. This means miners, wallet providers, and exchanges all worked together quickly to change their software, which in turn, changed the rules with consensus. If consensus cannot be met, then the network will split into two factions, and if both networks prove to be viable, then two tokens will exist. Two examples of this kind of split taking place after a hard fork include bitcoin cash and ethereum classic.

For instance, when the ‘network agreement’ was not met in these two cases, two distinct blockchains sharing the same history now exist. And since there are two networks there are also two tokens now — meaning if you hold 10 BTC you also own 10 BCH if you held your private keys prior to August 1, 2017.

Over the past three years, a few ‘agreements’ have been made but none of them have reached consensus. The failed Hong Kong Agreement was similar to NYA but the Segwit2x compromise has taken things further.

This past August’s bitcoin cash fork did not have consensus, and this means the blockchain diverged into two networks with different rule sets. Bitcoin cash has stripped the Segwit code from the protocol and implemented an 8 MB block size increase. Developers of bitcoin cash believe Segwit was an unnecessary soft fork and chose to split before the Segwit2x (BTC1) miners integrated the change. For the pending November 16 hard fork, Segwit2x developers have opted to keep Segwit within the code, but the miners running the BTC1 software plan to change the rules to increase the block size from 1 MB to 2MB.

At block height 494784 the Segwit2x working group led by bitcoin developer Jeff Garzik, and a large swathe of miners and businesses, plan to hard fork the network. The plan is part of the New York Agreement (NYA) which outlined a compromise with two forks. The first part of the commitment implemented was the soft fork Segwit, and the latter half of the agreement is a 2 MB block size increase utilizing the hard fork method.

The issue with the pending fork is some people believe the change does not have full consensus. The Segwit2x fork has been controversial across social media, forums, and developers’ mailing lists. A portion of miners and some businesses have stated they will not support the hard fork. However, according to statistics a large majority of miners (over 80%) are still ‘signaling their intention’ to hard fork the network at block 494784, and their ‘intentions’ show they have enough hashrate to complete the goal.

The free market or laissez-faire coupled with technical merit and a vast network affect will decide the fate of bitcoin, its forks, and altcoins as well.

The Free Market Will Embrace the New or Old Network

The bottom line is forks can be confusing, and you have to investigate the reasons for why they are taking place. After understanding the who, what, where and why the fork is happening then you can figure whether or not you support the protocol changes. As an investor, you decide which bitcoin will win and which one has superior technical merits. Bitcoin is an open-source protocol, and really anyone can fork the network, but it doesn’t mean the market will embrace the new blockchain or the old one. Essentially, the free market and you will decide on which bitcoin blockchain gives the world economic freedom and shakes up the current status quo.

Crackdown On Bitcoin In UK Over Money Laundering, Tax Evasion