Evolution of Blockchain Technology: Insights from the Github Platform (Evolution) is an analysis by Jesus Leal Trujillo, Steve Fromhart, and Val Srinivas ofDeloitte Touche Tohmatsu Limited (Deloitte). Their findings reveal the wild growth of the Bitcoin-generated blockchain industry and the subsequent projects yielded. Many were started, few remain. 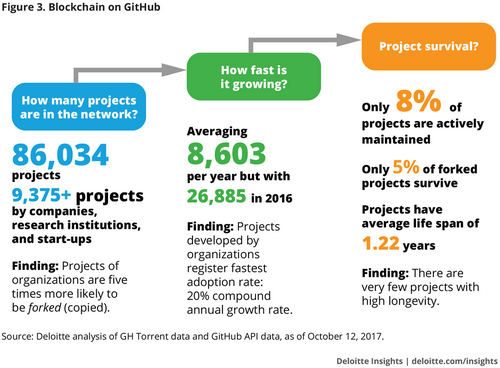 The First Empirical Attempt to Understand the Evolution of Blockchain

According to a recent study published this week, blockchain-related projects average nearly 9,000 a year since Spring of 2009. Growth has taken off, however, as in 2016 over 26,000 projects were started through the open-source platform Github.

“In analyzing blockchain repositories and their content,” Evolution explains, “we noticed that increasingly more organizations appear to be getting involved. In 2010, organizations developed less than 1 percent of all projects. By 2017, their blockchain projects accounted for 11 percent,” the study notes.

The Evolution study is “an effort to better understand the development of blockchain and its ecosystem,” Deloitte analysts write, and “we have conducted an extensive data analysis of blockchain projects in an open-source environment. Our study appears to be the first empirical attempt to understand the evolution of blockchain using metadata available on Github, a global software collaboration platform,” they claim.

Findings include how financial “services firms seem to be leading the way in blockchain applicability; they currently have the most commercial use cases of blockchain in the marketplace.” 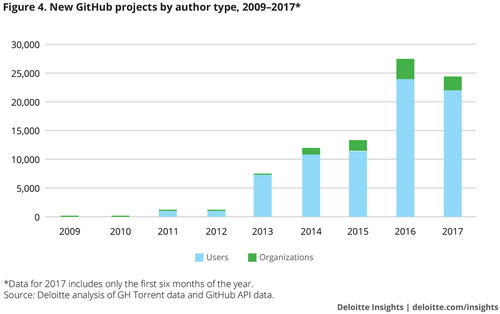 The two dominant projects all build upon are Bitcoin and Ethereum, and both are supported by foundations of one kind or another. “In short, organization-led projects are the backbone code for thousands of other projects,” researchers highlight. “Out of the 20 most central projects in the blockchain space measured by popularity, citation, and collaboration, 18 were created and maintained by organizations”

The beauty of open-source is that projects tend to move as the spirits of their developers and contributors. Such inspiration comes from a variety of sources, and it does appear difficult to maintain. “Our analysis found that only 8 percent of projects are active,” Evolution documents, “which we define as being updated at least once in the last six months.” Projects maintained by organizations, however, have an active rate of nearly double that.

“Note that about 90 percent of projects developed on Github become idle, and the average lifespan of a project is about one year, with the highest mortality rate occurring within the first six months,” the UK firm details.

The study concludes success might boil down to three ultimate factors: single-users most likely are tinkerers, unserious ultimately about their projects; instead of one committer or leader for a project, organizations that disperse workload concentration tend to do better; and lastly, projects that are copied (forked) survive longer, though their copies often do not. 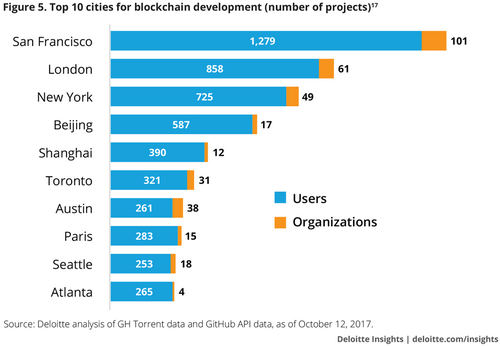 Evolution also found San Francisco, London, and New York are the places to be regarding blockchain projects. They term San Francisco “diverse,” giving way to “solutions for exchanges, wallets for cryptocurrencies, interfaces for different blockchains (for example, Ripple, Hyperledger, and Ethereum), and payment tools for cryptocurrencies.” London seems all about Ethereum. New York appears “to be specializing in projects that are geared toward traditional financial services,” as might be expected.

Crypto Investors Advised to Keep Detailed Records of All Transactions