Fantom network FTM/USD experienced exponential growth in 2021. The growth continued in January this year, as the native token almost recovered to its all-time high. However, Fantom was subsequently hit by a weakness that swept across the sector.

Fantom experienced a downturn in March this year. Two of its leading developers announced the exit of a once booming crypto project. Andre Cronje, one of the lead developers, was instrumental in the growth of Fantom. The market didn’t receive the news well, as Fantom’s native token crashed afterward.

The network’s total value locked dropped by more than 21% in 24 hours after the news. Currently, Fantom boasts $842.25 million TVL. The TVL is significantly below an all-time high of $12.79 billion as of January 25.

Fantom has been bearish as network woes continued. There were speculations of the return of the developers, but nothing remains confirmed to date. Alongside the crash in the crypto segment, Fantom remains under pressure. 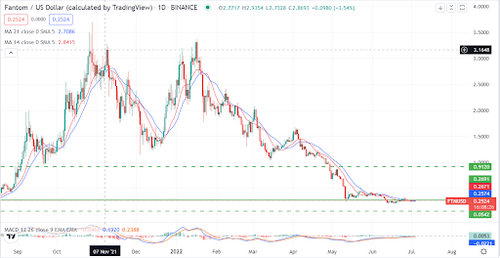 From the technical outlook, FTM is trading around the support, established at $0.28. The current price is $0.24, although not sufficient to be called a breakout. The price is under pressure as nothing confirms a bullish reversal at the support. The 21-day and 14-day moving averages offer resistance above.

The MACD indicators are in the bear zone. We project a further decline of the Fantom token. The next support is established at $0.05 if the $0.28 zone fails to hold. However, crypto volatilities mean the price could recover quickly.

Fantom is under pressure at the $0.28 support. Although yet to successfully break below, technical indicators support a lower price. The crypto-token may fall further if the support fails to hold, with the next level at $0.05. The price may reverse above the next support if crypto fundamentals improve.