The latest political figure in China to fall from grace is one whose influence has been felt by anyone in the country who has gone online in the past five years. 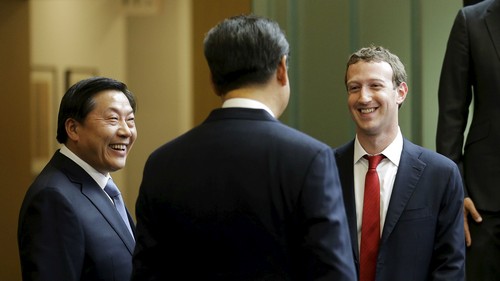 State media outlet Xinhua reported late Nov. 21 that the Central Committee for Discipline Inspection (CCDI), China’s main corruption-busting agency, has placed former internet czar Lu Wei, under investigation. The revelation marks the fall of a once high-flying political figure who was one of the leading figures behind China’s efforts to police the internet within its borders. But there should be no illusion the move to investigate him signals a change in policy-almost as a reminder of that, news surfaced that Skype disappeared from China’s app stores around the same time as the investigation was announced.

Lu stepped down as head of the Cyberspace Administration of China (CAC), the country’s main internet policy regulator, last year. Since 2013, when he was appointed head of a predecessor organization, he made his impact felt. Soon after taking power, a wave of prominent users on Weibo, one of China’s largest social networks, received invitations by officials to “drink tea” with officials, a way of signalling they were under increased scrutiny. The campaign helped quell political debate on the site, which once was a vibrant hub for discussing the failings of the government.

After that, Lu continued to tighten controls on China’s internet. VPNs, necessary tools for jumping China’s Great Firewall, have grown less effective. His agency also oversaw the earliest drafts of the recently implemented Cybersecurity Law, which requires foreign technology companies in China to store their data within the country’s borders.

All the while, during his tenure, Lu retained an unusually high profile for a public official. In 2014 Mark Zuckerberg greeted him at the company’s offices in California, where he was photographed with a copy of Xi Jinping’s book “On Governance.” Lu also appeared at a summit in Seattle where government officials met with key executives from Apple, Qualcomm, and other foreign technology companies. Jon Huntsman, a former US ambassador to China (and now envoy to Russsia), said of him in Time’s 100 most influential people list for 2015: “Lu is imposing tougher Internet regulations because of social-stability concerns, which means a new generation of Chinese tech entrepreneurs may find themselves in a culture clash.”

In 2014, Lu spoke at the opening of China’s first-ever World Internet Conference in Wuzhen in 2014, a Davos-esque gathering of global tech luminaries intended to celebrate China’s internet sector. All of these efforts helped surreptitiously validate the Chinese government’s growing control over its internet.

The reasons behind Lu’s detention remain unclear-the CCDI states only that he is being investigated for (link in Chinese) “serious violations of discipline.” The timing also stands out-the next World Internet Conference is scheduled to take place during the first week of December. China’s CCDI did not immediately respond to Quartz’s emailed questions about Lu’s detention.

Since stepping down from his position abruptly in 2016, Lu has remained largely out of the public eye. His successor, Xu Lin, has kept a low profile.

Yet even without Lu in power, China’s internet looks set to continue on the path that he laid forth under president Xi Jinping, whose leadership has seen a crackdown on expression and an increase in surveillance. Throughout 2016 and 2017 restrictions placed on social media outlets have intensified, and the Cybersecurity Law went into effect despite calls from the US to halt it. Artificial intelligence companies are also collaborating with government branches to launch sophisticated surveillance techniques. Lu’s vision for the internet thus far has extended far beyond the man himself.

Removal of internet czar reminds me of Zhou Yongkang’s fall; there was a collective sigh of relieve, but the controls that came next has been worse.

Uber ‘in talks to buy Deliveroo’