A sea of demonstrators young people took to the streets of Washington, DC on Saturday for “March for Our Lives,” a demonstration in support for gun reform. It came just over a month since the mass shooting at Marjory Stoneman Douglas High School in Parkland, Florida. 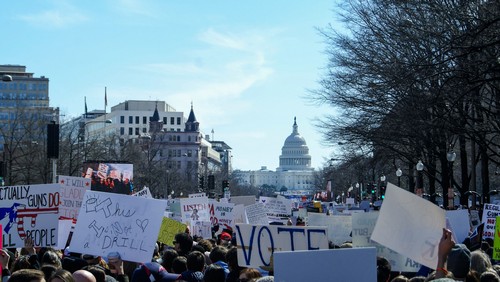 Protesters cheer in support of a speaker. (Jackson Fox-Bland/The Beacon)

Within that crowd were 10 student journalists from the US capital’s Woodrow Wilson High School and its student newspaper, the Beacon. Their on-the-ground reporting was included as part of the Huffington Post’s coverage of the day’s events in DC.

After the march, they shared some of their additional reflections and photos from the day with Quartz:

As a DC student, I’ve had the privilege to be involved in various marches and social movements, and yet it quickly became clear to me that this one was different. Every student was very clear about their end goal: common-sense gun legislation. They provided realistic solutions. As a journalist, it was amazing to meet so many people who were willing to open up about their experiences and share their stories. It was truly a special opportunity to be able to report on an event that will likely one day make history textbooks.-Chloe Leo, co-editor-in-chief

I was struck by the movement they had created and the palpable message they had crafted. Every participant I spoke to, from DC, Parkland and around the country, had a laundry list of policy changes… And they all immediately drew the connection to voting and how it was so important to show up the polls come the midterm elections. It was truly amazing.-Benjamin Korn, co-editor-in-chief 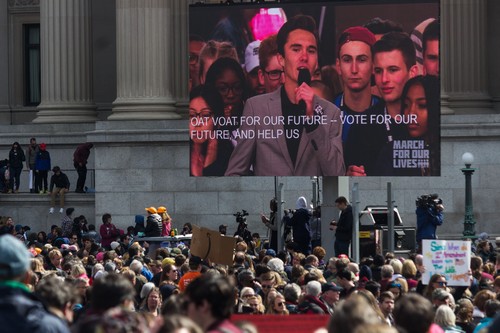 What impressed me most about this march was its inclusiveness. Previous demonstrations, the Women’s March especially, were criticized for their lack of diversity, excluding people of color from the conversation. But seeing the students on stage acknowledge that while a bullet does not discriminate, gun violence disproportionately affects communities of color was refreshing and encouraging.-Meredith Ellison, written content editor

We had no negative interactions with anyone and people helped us move through the crowd if there was someone with a cool sign who we wanted to get to. It was just a really wonderful feeling to be in the field and talking to people. –Maya Wilson, features editor

This rally seemed to have more urgency than any of the other marches we’ve had here in DC. The Women’s March and the Science March felt like we were protesting a hypothetical, something that could happen during the presidency. Nothing about the March for Our Lives is hypothetical, we’ve grown up seeing acts of gun violence in our country and especially in our community. –Abbey Korman, business manager 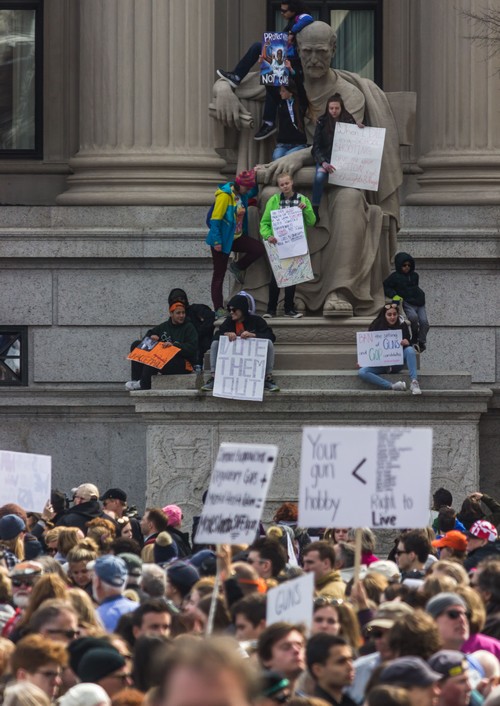 A sign held up during the march. (Jackson Fox-Bland/The Beacon)

Reporting on this event from an unbiased perspective, without carrying signs and chanting along with the masses, was something I had never done before. Although I was not used to it, it allowed me to talk to so many protesters to find out their story. I found the enthusiasm of the speakers and protesters truly empowering and gave me hope for the future and for the next generation.-Chloe Fatsis, junior editor

Crowds at US Navy Memorial Plaza watchs as David Hogg, a survivor of the Parkland shooting speaks (Jackson Fox-Bland)

I don’t think I’ve ever seen a march where, due to how dense the crowds were, few were able to actually march. I myself got trapped in the crowd a couple of times. This limited mobility made photographing it and finding good angles a challenge, but I welcomed it, climbing trees and making my way to the edge of barriers to get a better view. Being able to see how passionate people were, and being able to capture this passion was incredible.-Jackson Fox-Bland, photo editor

A view from atop a tree over the sea of marchers and signs below. (Margaret Heffernan/The Beacon)

Where do teenagers fit in all of this? We are the ones on the front lines today. We are the ones attempting to change our future instead of asking our parents for help. We are the new breed of teenager who-through a collection of early exposure, damaging experiences, and constant rejection-has been formed into a more knowledgeable and younger adult. One who is the news instead of solely reporting on it.-Alex Metzger, junior editor