Yesterday, as broadcaster Jami Floyd began discussing Matt Lauer, my hand hovered near the radio. When Floyd started detailing the specific allegations, I switched the station to classic rock. As we endured REO Speedwagon, my seven-year-old daughter asked what the NPR story was about, and said it was about a man who attacked women. 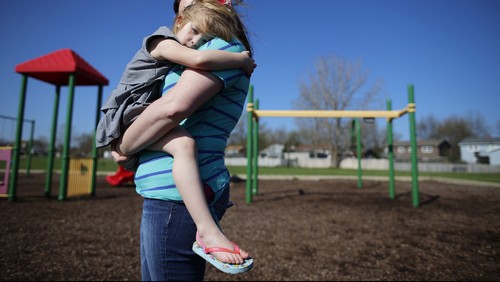 On our evening drive home from after-school child care, my kids and I listen to news on pubic radio. I figure it’s good for them to know what’s going in the world, but sometimes I turn it off if the subject isn’t appropriate

“What does attack mean?” she asked.

“It means he punched them,” my 10-year-son offered.

No, this was different, I tried to explain. “You know how mommy and daddy tell you not to let anyone touch your private parts? Well, sometimes that happens with grown-ups, too.”

The conversation moved on, and I felt fortunate to escape that easily.

The subject came up again later that evening, though, when my daughter asked about the cover on this week’s New Yorker, a brilliant sketch by Barry Blitt of a Harvey Weinstein-esque male, holding open his robe and flashing a Thanksgiving Day-parade balloon of Betty Boop as she floated by.

I explained he was one of the bad men we talked about in the car.

“So he’s showing her his stomach? That’s funny!” Another bullet, dodged.

When I was a newspaper reporter in my 20s, I bristled when readers complained after we ran disturbing stories or images on the front page. “How will I explain that to my kids?” they wailed. It’s the world they live in, I would think, and it’s up to you to prepare them for it.

Now as a parent, I recognize it’s a bit more complicated. I may be an NPR-listening, New Yorker-reading cliche of a northeast journalist (disclosure: I also drive a Subaru and watch soccer on TV). But I know I’m hardly the only parent struggling with how to handle this peculiar moment in our history, nor the only one who’s wondering why it seems so much easier to discuss terrorism or school shootings than the violent lechery of these men.

At its best, parenting is an ad-hoc process, a never-ending series of adjustments and course corrections. It’s like climbing a mountain without a map: You can see the summit, but figuring out how to get there is up to you.

As children age, parents are charged with both sheltering and exposing. We want our kids to understand the world we’re forcing them into, but not too much, too soon. You give a little here, you pull back a bit there. Can they watch this? Can they listen to that? Is this show appropriate? What about that movie?

This is different. I’m not going to dismiss questions about sexual harassment when the stakes are so high. I want my children-my son and my daughter, both-to know what behavior is unacceptable, and what they should do if they encounter it. Yet I resent being backed into that conversation before my children are ready for it.

You hope for an orderly progression: First we’ll explain where babies come from, then we’ll move on to these other questions. But Harvey Weinstein, and his brotherhood of grotesque men, have accelerated that timeline, and forced their ugliness onto our radio and into our car during the ride home from school. It means uncomfortable questions, and answers I should have ready, but don’t. I’m thankful my children have no real knowledge about these accused men; at this point they’re only anonymous villains, and have never been their heroes.

As difficult as the conversations are, at least they’re a function of these horrors finally being brought to light. I wasn’t asking questions about men like Weinstein as a 10-year-old because I’d never heard of any men like that. Though they certainly abounded, their stories were hidden-or if they were told, they were glossed over without the damning details. And it’s because no one was exposing men like Weinstein 30 years ago that they continue to prey on women without fear of repercussion.

Therein lies the crux of this moment: We’re finally squaring accounts left delinquent for years. The can kicked down the road by the generations before us has finally been picked up.

And if answering uncomfortable questions in our car today means that in 30 years, my kids-in their autonomous, flying Subaru-won’t have to answer the same questions, that’s a deal I’m willing to take.

Crypto Advertisement Still Unwelcome, How Is the Industry Coping?