CBP Division of Business Transformation and Innovation head Vincent Annunziato said the agency was beginning a “live fire testing” of a blockchain platform to certify that imported products originated where they claim during CBP’s 2018 Trade Symposium in Atlanta, according to the American Shipper.

The new system, which will launch in September, is going to help CBP verify information about imported goods and check how foreign suppliers act toward American importers, he said. The system can also be used to authenticate trademarks and check on an item’s physical properties.

“I can even go in and say, ‘hey, I need a little information on the stitching,’ or, ‘I need information on what colors are viable,'” Annunziato said.

Annunziato said the blockchain system could be used in a mobile app, which would replace a paper-based manual process for verifying such information, thereby streamlining the agency’s work.

He also provided an update to the agency’s work with the Commercial Customs Operations Advisory Committee (COAC). As previously reported by CoinDesk, COAC formed a special group advising the Secretaries of Treasury and Homeland Security on the agency’s commercial operations last November. The body was said to focus on emerging technologies in general and on blockchain in particular.

This week, Annunziato confirmed that the committee was working to develop a proof-of-concept blockchain platform to verify intellectual property by confirming the relationship between licensees and licensors. The technology could ultimately eliminate paper processes, manuals and databases, CPB hopes.

The CBP press office did not respond to a request for comment by press time.

First Round of XRP Ledger Grants to Focus on NFTs 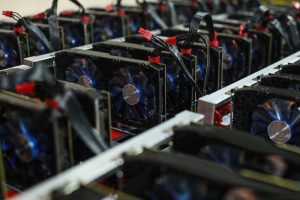 Analysts Debate How Much Power Is Consumed per Bitcoin Transaction

Crypto Startups Are Destroying Millions of Coins – And Investors Love It