The bitcoin price rallied to a 24-hour high following the announcement that U.S. derivatives exchange CME has self-certified to list bitcoin futures contracts in mid-December.

As CCN reported, CME announced on Friday that, pending final regulatory approval, the exchange will launch its much-anticipated bitcoin futures product on Monday, Dec. 18. Though CME had signaled its intent to launch these products before the end of the year, many people doubted the U.S. Commodity Futures Trading Commission (CFTC) would grant their application within this time period.

The bitcoin price surged in response to the news, rising to a daily high of $10,760 on bitcoin exchange Bitfinex. This represented a nearly $2,000 recovery from yesterday’s low, which saw the bitcoin price fall as far as $8,801. At the time of writing, the bitcoin price was trading at $10,452 on Bitfinex, representing a 24-hour increase of approximately 14 percent.

The advent of bitcoin futures and other exchange-traded derivatives products is widely-expected to hasten the mainstream adoption of cryptocurrency as a financial instrument. Pantera Capital CEO Dan Morehead has gone as far as to say that he anticipates that bitcoin will soon become a “rational, expected” component of a diversified financial portfolio. 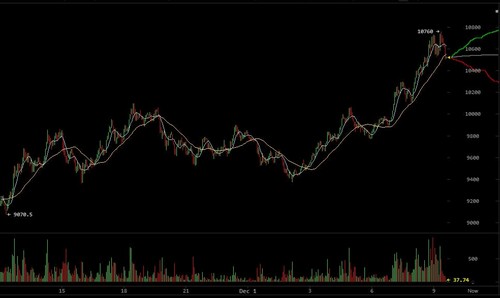 Some institutional investors – most notably Thomas Peterffy of Interactive Brokers – have criticized bitcoin derivatives products and expressed concern that they will destabilize the the markets. However, CME CEO Terry Duffy has argued that those fears are overblown, noting that the exchange has rules in place to prevent that from happening.

Despite reservations from some investors, U.S. exchanges have been rushing to add bitcoin futures to their product lines. Earlier this week, a Wall Street Journal report stated that Nasdaq Inc. plans to launch a bitcoin contract on its futures exchange during the first half of 2018. In a separate announcement on Friday, fellow Chicago-based market CBOE revealed that it has filed product certification with the CFTC as a precursor to launch its own bitcoin futures product under the ticker symbol XBT. Neither Nasdaq nor CBOE’s futures have an official target launch date, however.

Visa CEO: Crypto Doesn’t Challenge Our Hegemony in the Short to Medium-Term