A bill has been introduced in South Korea to require public officials to declare their investments in cryptocurrencies including bitcoin. This initiative follows the recent controversies within the government regarding cryptocurrency regulations, including insider trading and market manipulation.

Chung Dong-yong, a member of the South Korean National Assembly’s Administrative and Security Committee, has introduced a bill to add cryptocurrency holdings, such as bitcoin, ether, and ripple, to the list of public disclosure items, according to local media. 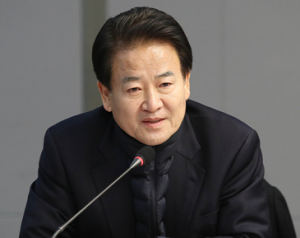 The bill amends the Public Service Ethics Act to require public officials to declare their cryptocurrency holdings of 10 million won or more (~USD$9,350). If the officials provide false or misleading information regarding their crypto possessions, Chung proposed a penalty and disciplinary action, Money Today detailed. The Hankyoreh then quoted him saying:

Since the South Korean government announced its cryptocurrency regulatory measures in December, there have been several controversies and signs of contention among officials. 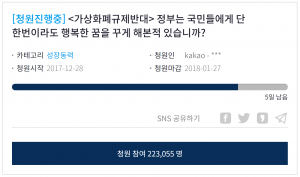 Multiple national petitions have been filed concerning crypto regulations including one entitled “Has the government ever dreamed a happy dream for the people?” At the time of this writing, 223,055 people have signed this petition. According to the rules set by the Blue House, the government will respond to any petition with over 200,000 signers.

Recently, the lack of coordination among government departments led to the Ministry of Justice announcing that it is considering a cryptocurrency trading ban, followed by other Korean financial regulators distancing themselves from that standpoint. 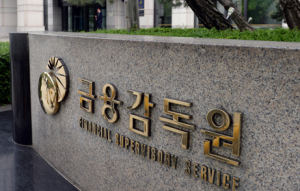 Last week, some employees of the Financial Supervisory Service (FSS) were accused of insider trading on knowledge of cryptocurrency regulations. The agency is currently investigating the case. However, according to attorney Yang Ji Min, “there is no legal provision for punishment” since cryptocurrency is currently not a financial product, Yonhap reported.

Meanwhile, Representative Ha Tae-keung presented evidence that the government’s 40-minute embargo procedure led to market manipulation, as news.Bitcoin.com previously reported. Ha suggested, “The government has to deal with the embargo officer and find out who leaked it,” Korea Economic Daily quoted him. The Prime Minister’s Office has denied any accusation of deliberate leakage of information.

We need to investigate whether we have taken unfair profits and disclose the status of our assets.

Do you think South Korean government officials should have to declare their cryptocurrency investments? Let us know in the comments section below.

Need to calculate your bitcoin holdings? Check our tools section.