Still, it’s interesting to hear how trading experts think a firm like Renaissance might approach bitcoin as an underlying asset, given the hedge fund’s reputation for using mind-bending math to identify patterns and anomalies across a universe of assets.

Renaissance, arguably the world’s most secretive and successful money manager, did not respond to requests for comment.
Prize-winning mathematician James Simons began Renaissance Technologies (originally called Monemetrics) in a Long Island strip mall in 1978. Renaissance is now famous for pioneering data science and machine learning before these disciplines went mainstream, and has been described as having the best physics and mathematics department in the world.
Highlighting the complexity of the fund’s approach, Max Boonen, the founder of digital assets trading platform B2C2, referred to a famous quote attributed to former Renaissance chief Robert Mercer, who said the firm was unable to make sense of some of its most profitable trading signals.
“Renaissance can make predictions based on pure time-series data and they don’t necessarily have to have a strong economic rationale for why a signal works or doesn’t work,” said Boonen. “In fact, such an approach might be quite appropriate for Bitcoin at the stage that it is. Because it’s sometimes very difficult to make sense of the moves in the Bitcoin market.”

‘Normal alchemy’
Richard Craib, the founder of Numerai, a hedge fund built by a crowdsourced network of data scientists, says he has come across young startups that are using artificial intelligence to get an edge looking at on-chain transactions, or mining alternative data around news flows in the crypto industry.
But he doubted Renaissance would be going to such lengths, opting for what he called “normal alchemy” instead.
“Renaissance and firms like it are very good at working with time-series data and already understand corn futures and oil futures and trade all those markets,” he said. “So I don’t think it means they have any thesis on bitcoin. I don’t believe they are going to be ‘long bitcoin’ or something, but it’s definitely worth taking on.”
While it might be alluring to think of a firm like Renaissance having some kind of dedicated bitcoin desk, it’s likely to be simply plugging in existing models, Craib added.
“I would guess they are seeing it more as, what can we do just with the price volume data, because a lot of their strategies don’t require new alternative datasets,” he said.

Just another instrument
Emmanuel Goh, CEO of derivatives data platform Skew, agreed that bitcoin is probably “just another instrument” to Renaissance.
“They have access to all the historical data and will be running all sorts of modeling on the instrument itself and see if there are some interesting patterns,” he said. “The dataset is a little bit smaller than for other instruments,” he said.
The Renaissance filing is further evidence that the derivatives market is where a lot of people will go to express their views in terms of financial instruments, Goh added. “We will be tracking how much activity there is on CME futures contract and if that picks up meaningfully to see if this means more and more people are entering,” he said.
These days, bitcoin trades more than the currencies of many smaller countries. But Boonen of B2C2 said there might still be a question whether the bitcoin market will be big enough to be worth it for Renaissance.
“Bitcoin remains a reasonably small market; it’s not the tiny market that it used to be, trading volumes are there and are strong. But I wonder whether the market today is big enough for it to be worth the risk for Renaissance,” said Boonen. “They are going to trade derivatives but still, there is possibly more risk than in trading conventional assets.”

Very uncorrelated
It’s also worth asking what Renaissance dipping into bitcoin futures means in terms of the leading cryptocurrency’s correlation to the rest of the financial system, a question highlighted by the recent COVID-19 markets crash that saw crypto fall with the rest of the S&P 500.
From the perspective of a fund like Renaissance, bitcoin remains a very uncorrelated asset, said Numerai’s Craib.
“When you are a big fund and you find this liquid market that’s uncorrelated and can take a lot of trading, you really kind of have to trade it. Because it’ll help your Sharpes so much to have a new source of alpha,” he said, alluding to the return from an investment balanced against the risk.
The more things you can trade, the more of an edge it gives you, said Craib, with the aim to create a model that works in every country and every sector of the economy and every commodity.
“Then you really have something. You can make a million predictions per day and be right in just over half a million of them. That’s much more what Renaissance is trying to do,” he said. 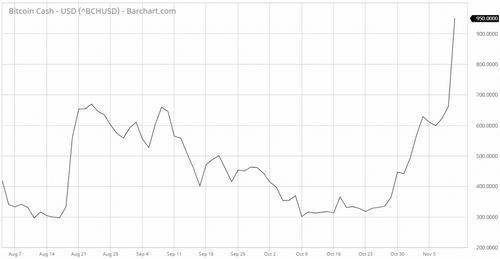