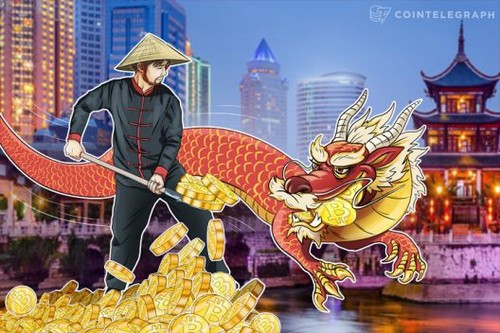 In an attempt to lift market sentiment, China has dumped cash totaling over 810 bln Chinese yuan – about $130 bln – into its economy over five days. This is a move to solidify the economy of the country and boost the nation’s supply, but they may have just helped their biggest enemy.

The Chinese government, since its shock ban on Bitcoin exchanges and ICOs, has been concerned with trying to keep capital in the country and thus seen it prudent to quash Bitcoin and other cryptocurrencies.

However, the cryptomarket in the Asian country has found ways to stave off the killing blow from regulators, and this most recent move could actually benefit the hungry Bitcoin investors still prevalent in China.

The extra liquidity came about thanks to repurchase deals. This sees the Central Bank buying securities from commercial banks as they agree to sell them again in the future. This capital is now floating around, quite liquid, in the economy, and there is no doubting it will join the Bitcoin revenue stream.

Nomura analysts said in a note, adding that the market is pricing in maintenance of a prudent monetary policy stance:

“We read this as a sign that financial deleveraging will be a multi-year theme and that deepening financial reforms are underway.”

Because Bitcoin continues to live in China, behind a black market-style wall, there is still a demand as the public find new and innovative ways to secure cryptocurrency.

Thus, it seems that China may well be shooting themselves in the foot with this latest move as it will no doubt have a trickle-down effect, leaving more capital to flow into cryptocurrency. From there, the extra liquidity could very easily siphon out of the country, unregulated and against the wishes of the regulators.

Cryptocurrencies may be banned and thus off the mainstream, but it does not mean they have died in the socialist republic. There have been other ways of trading and working with cryptocurrencies.

The cutting off of the head of the Bitcoin exchanges has only bolstered its body. LocalBitcoins have seen steady growth since the ban and are allowing for the market to live on, although in a different manner.

However, there has been some dulling of the once overactive Chinese market as a lot of the business that once occupied OKEx and Huobi has moved off the mainland.