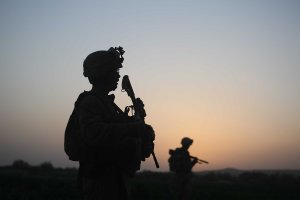 The Pentagon says four other soldiers were wounded in the Jan. 1 battle in the Achin district of Nangarhar province. Two of the wounded were in stable condition, and the other two have returned to duty.

The dead soldier was identified as 34-year-old Mihail Golin, of Fort Lee, New Jersey. He was assigned to Fort Carson in Colorado.

Gen. John Nicholson, the top U.S. commander in Afghanistan, says “we are deeply saddened by the loss of one of our own.”

The United States formally concluded its combat mission in Afghanistan at the end of 2014 but still carries out operations against the Taliban and an Islamic State affiliate, both of which are active in Nangarhar.

(© Copyright 2018 The Associated Press. All Rights Reserved. This material may not be published, broadcast, rewritten or redistributed.)