After 300 years of continuous human settlement, Hurricane Irma destroyed everything on the island of Barbuda and forced the relocation of its more than 1,600 residents, demonstrating that climate-induced migration is no longer a future possibility, but a present-day reality. A week and a half later, Hurricane Maria knocked out power for Puerto Rico’s 3.4 million residents and left much of the island without potable water. Fifteen percent of Puerto Rico’s population is expected to leave the island in the coming year. 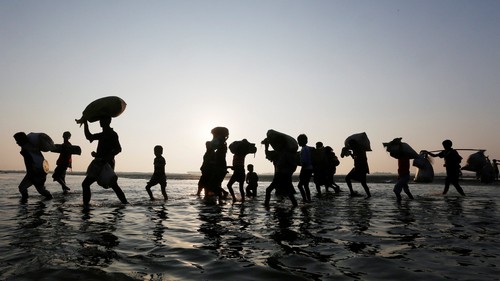 Estimates vary, but the consensus is that there will be at least 200 million people displaced by climate change by 2050. In order to address this already unfolding reality, we need to reconsider the relationship between borders and climate change now.

There will be at least 200 million people displaced by climate change by 2050. It might seem that borders have no impact on climate change: Hurricanes destroy human settlements in the Philippines and the United States alike. Winds blow dust, pollution, and rains across borders. Sea level rise affects the countries that produced pollution and those that did not. But in reality, environmental change is shaped by borders and sovereignty in several significant ways.

First, there is a strong geographic pattern to where environmental pollution was historically produced and where environmental changes will most severely be felt today. Beginning with the industrial revolution, countries in Europe and North America produced 68% of all emissions, while only accounting for about one-sixth of the world’s population. Nevertheless, the latest Intergovernmental Panel on Climate Change report finds that the countries that have historically polluted the environment will be less negatively affected by climate change. The report identifies sub-Saharan Africa and small island states, like Antigua and Barbuda, as the most vulnerable to climate change because they do not have the resources or infrastructure to adequately adapt to environmental changes.

The environment and the displacement of people from environmental changes are cross border issues that extend beyond the authority of a single country.  Second, bounded sovereignty also makes it difficult to create effective international agreements to combat climate change. The sovereign rights of the state are revered by nationalist leaders because they endow them the ability to put the needs of their people above all others. In his UN speech on Sept. 19, US president Donald Trump mentioned some variation of the word sovereignty 21 times. Although some criticize the UN as a form of global government, the charter of the United Nations enshrines the right to absolute sovereignty within borders and UN-sanctioned agreements — including the Paris Agreement — do not infringe on these rights.

In the Paris Agreement, states determine their own contribution, monitor their own progress, and face no consequences if they do not meet the goals they set. As long as local economic factors trump global environmental impacts, climate agreements are bound to fail.

Finally, and perversely, the countries that produced the majority of the emissions that cause climate change are now building walls and securing borders to prevent the movement of people who are displaced by it. As late as the year 2000, there were 15 border walls around the world, but today there are almost 70. Borders and sovereignty mean that countries can decide who has the right to move and can turn away even the most desperate people displaced by climate change.

There have been some early efforts to address the problem of climate induced migration. The Paris Agreement established funds for least developed countries and for adaptation, but these are focused on mitigating risks and rebuilding after disasters. Additionally, Germany and Bangladesh have been leading the Platform on Disaster Displacement, which is an intergovernmental effort to prepare for disasters through prevention and awareness. These meager efforts are well intentioned but do not go nearly far enough.

International institutions are meant to address issues that are not confined to single states but cross political borders. There is already agreement that a few very narrow issues including genocide and state-sponsored terrorism are exempted from the protection of state sovereignty.

The environment and the displacement of people from environmental changes are cross border issues that extend beyond the authority of a single country. In order to realistically address the climate crisis, two more exceptions to absolute state sovereignty are required: the right of people to move from one territory to another and the right of the global community, not individual countries, to regulate the emissions of climate changing pollutants. This does not mean getting rid of sovereignty entirely, but it does mean countries must give up sovereignty over decisions that involve issues that have significant cross-border impacts.

Opening borders and removing sovereignty from environmental decisions will be seen as radical proposals by some. However, the more radical choice is to build walls and ignore climate change, pushing us headlong into a rapidly arriving dystopian future of walled states, violent borders, and hundreds of millions of displaced environmental migrants struggling to survive rising seas, heat waves, and devastating environmental change.

Google Partnership With Hedera Hashgraph Can Generate $1.9B by 2024