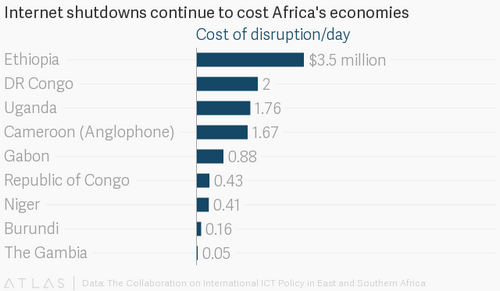 For almost two months now, Cameroon’s government has restricted access to social media and messaging apps in its Anglophone regions, adding to the already simmering tensions in the country.

The current two-month cutoff is the second prolonged restriction in 2017: there was a 93-day, complete internet shutdown that lasted from January to April. Altogether, the regions have had intermittent or no internet access for more than 150 days in 2017, so far.

In late September, the government disrupted the internet ahead of protests against political and economic discrimination in the Northwest and Southwest regions. The Oct.1 protests against the dominance of a French-speaking government in the bilingual country, have turned deadly, with explosions targeting local security officials. In a bid to stifle dissent—and even calls for a break-up of the country—the government cut access to these social media platforms as a way to frustrate online mobilization.

Internet and digital freedom advocates tell Quartz that the government blocked or throttled access to widely used communication platforms like WhatsApp and Facebook Messenger, with many using virtual private networks to access these sites.

As one of Africa’s longest-serving rulers, president Paul Biya’s government has come to understand the deft nature of communication technologies and its increased role in organizing social and political movements. As such, the government has criticized social media users in the past, labeling it a “new form of terrorism” controlled by “amateurs, whose ranks, unfortunately, continue to swell and who do not have a sense of etiquette and decorum.”

The January to April blackout took a heavy toll on the country’s budding technology center, located in the Southwest region and popularly known as Silicon Mountain. Entrepreneurs and businessmen were left scrambling, losing clients and working hours, and were forced to move to cities and towns with internet services. The digital rights advocacy Access Now says the current shutdown cost the two regions almost $3 million.

The social media freeze is also disrupting lives, with many reporting that they can’t easily reach families caught in the anti-government demonstrations.

The situation in Cameroon is complicated by the government’s monopoly over the internet infrastructure. Camtel, the country’s national telecommunications company, operates the fiber optic backbone that provides internet to the country—making it easy for them to shut down the internet and pressure other telecom operators to do so. Internet advocates tell Quartz that while the social networking sites are blocked on MTN’s network, they are accessible “from time to time” on Orange. The unruliness, they say, could possibly be linked to a dispute between Orange and Camtel.

However, internet and social media shutdowns are not just a Cameroonian problem—it’s an African problem. In 2016 alone, 11 countries disrupted internet communications before crucial elections in Uganda, during national exams in Algeria, and anti-government protests in Ethiopia. The blackouts also cost African governments hundreds of millions of dollars, disrupting the delivery of critical services and undermining economic growth. Policy proposals to punish governments have often failed, leaving the continent’s thinkers and businesspeople worried about the future repercussions.

Last week, Sudanese-British billionaire and telecom pioneer Mo Ibrahim told Quartz the shutdowns undermine the continent’s digital development. “Closing down of the internet is really a crime. And that should not be tolerated,” he said.