Willy Woo, a highly regarded cryptocurrency and bitcoin analyst well known for his contribution to WooBull.com, has stated that the bitcoin price could suffer a major correction by the end of November, upon the SegWit2x hard fork.

A wild stab for November… BTC dumps before the HF, alts rebound, and a 3-way hash war between the 3 Bitcoins and BCH gaining a lot of value.

Analysts including Woo and Tom Lee of Fundstrat have emphasized for many months that the SegWIt2x hard fork scheduled to be executed on November 16 could very likely lead to a major price correction, as a small portion of bitcoin investors who have allocated their funds from alternative cryptocurrencies (altcoins) to bitcoin with the sole purpose of obtaining the newly created SegWit2x coins or B2X reallocate their funds back to altcoins.

The abovementioned theory is viable, considering that the only method of obtaining B2X immediately after the fork is to own bitcoin prior to November 16. While SegWit2x has not added replay protection as bitcoin hardware wallet development firm Trezor recently explained, there exists a complicated method with which users can withdraw and be credited with B2X. Hence, logically, it is possible that altcoin holders would briefly allocate their funds into bitcoin to obtain B2X and almost immediately withdraw bitcoin after obtaining B2X thereafter.

Developers of Trezor said in an official statement released earlier today, on November 7:

“The TREZOR device supports both BTC and B2X. For both, new and legacy addresses will be supported. However, as SegWit2X will not implement replay protection, there are certain steps you need to take before you can use both coins safely. We will prepare a guide for you to follow, should you wish to split your coins and use both coins.”

But, the theory is also conditional to a certain extent, because it assumes that altcoin investors would allocate their funds prior to the fork solely to obtain B2X upon the fork. For the vast majority of bitcoin users and investors, the fork should a non-issue, because they can still hold and use bitcoin normally prior to, throughout, and after the fork without any technical problems with their wallets or exchanges.

The rapid surge in the price of bitcoin over the past two weeks has been mainly attributed to the optimistic bitcoin futures and options exchange launch by CME, the world’s largest options exchange by volume. However, analysts like Woo have also described the allocation of funds from altcoins to bitcoin as one of the major factors in the price surge of bitcoin, which has been displayed by bitcoin’s increasing dominance over the cryptocurrency market. 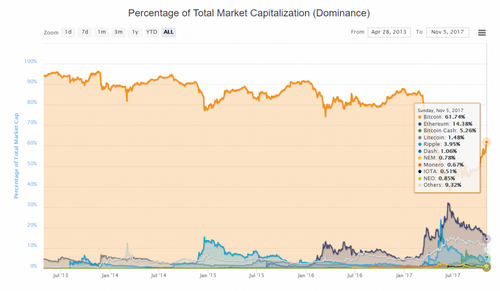 Conclusively, it seems unlikely that the price of bitcoin will suddenly crash after the fork, given that the market has had a relatively long period to prepare for the fork. Also, the theory in which altcoin investors have briefly stored their funds in bitcoin to obtain B2X is conditional on many levels, based on speculation and assumption.

Furthermore, even if the bitcoin price suffers a major correction on November 16, which will most likely be the case, the CME bitcoin exchange launch scheduled for late November could play as a driving factor to increase the value of bitcoin once again.