Ripple (XRP) has gained significant momentum against the dollar in recent weeks, but has failed to extend its rally north of an important psychological hurdle.

Ripple was little changed against the dollar on Friday, trading at 0.2175. Price levels hovered between 0.2150 and 0.2183 throughout the session, with most of the trading activity occurring below the daily open of 0.2173.

Prices are up nearly 3% over the past week, but have failed to pierce the all-important 0.2250 level. Ripple recently traded above 0.2200 U.S., reaching a high of 0.2234. After a clear uptrend kicked off the week, XRP/USD appears to have run into major resistance, with the formation of a double-top forming around the 0.2212 region.

XRP’s momentous rally began earlier this month amid positive vibes from industry researchers, who expect 2018 to be a breakout year for the cryptocurrency. Higher trading volumes on the Korean peninsula have also been cited as a major catalyst for renewed buying interest.

The coin has turned over $142 million over the past 24 hours, according to CoinMarketCap. At $9.4 billion, Ripple is the world’s fourth-largest cryptocurrency. 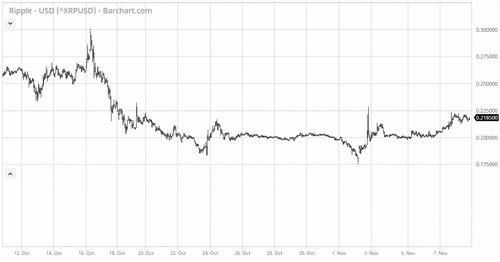 Ripple Not on U.S. Traders’ Radar

For all the hype surrounding the XRP token, most Americans don’t really care about it, according to a new study by LendEDU. The researcher’s latest survey revealed that almost half of respondents wouldn’t invest in Ripple.

Similar trends were observed for Ethereum, the world’s second-largest crypto by market cap.

Although the survey was based on a small sample size of 1,000 people, it reveals that bitcoin continues to be the face of the cryptocurrency market. Numbers don’t lie, either.

Bitcoin’s market cap of $121 billion is roughly 58% of the total cryptocurrency universe. That figure was well above 63% prior to the latest rally in altcoins. IOTA, Litecoin and Ethereum put up sharp gains in day trading on Thursday.