Scott Douglas is the sort of man you’d expect to see in line behind you at Starbucks. He has a calm, quiet demeanor, and carries a subtle pioneering spirit that’s hard to categorize. He is the kind of person you would imagine seeing on Wall Street, deftly moving on his way to a client meeting, or in a high powered boardroom of a Fortune 500 company. With the uncanny ability to merge his technical knowhow, business acumen and genuine persona, to help businesses understand and move into the 21st century – you couldn’t pick a better man to be the face of blockchain. 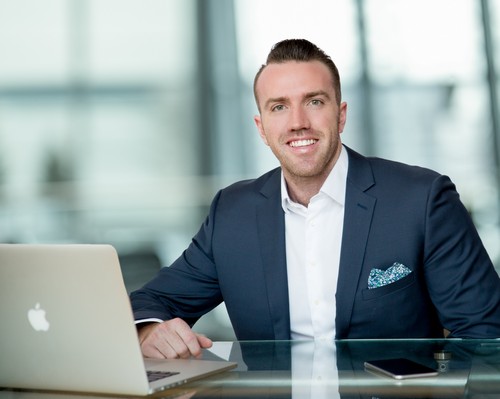 Scott Douglas is someone who has a big plan. That plan is to change the way both businesses and the world at large think about digital currencies like Bitcoin. If successful, his plan could fundamentally change the way the global economy works.

Bitcoin – The Future of Commerce

You’ve likely seen it on the news – Bitcoin prices increasing rapidly, and trading volumes exploding upwards. Industry thought leaders like Bill Gates and Apple co-founder Steve Wozniak are praising it, claiming that it is the future and it is unstoppable.

There’s a problem with this story, however. Like most new technologies, especially those relating to the financial world, businesses are slow to adopt or fail to adopt at all. Just like half a century ago when credit cards first came on the market, businesses treated them with distrust. Now credit card transactions represent trillions of dollars in economic activity. Many economists believe that digital currencies are the next, and perhaps most important revolution.

According to market tracker coincap.io, at press time the current valuation of all digital currencies, known as cryptocurrency, is just under $170 billion US dollars. Bitcoin, which is the most well known among them, holds just over half of that value, at $95 billion dollars. While an individual can buy plane tickets, furniture, coffee, and even a medieval castle on the Spanish coast with Bitcoin, most businesses are still choosing to remain ignorant of the pending revolution.

“Only 5% of the top 500 companies in the world accept payments in the form of digital currency. This is a huge, untapped market that represents hundreds of billions of dollars – and businesses need to step up to the challenge of integrating it. Otherwise, they run the risk of being left behind.” – Scott Douglas, CEO of the Crypto Improvement Fund

From humble beginnings in January 2017, Scott Douglas founded the fintech startup, the Crypto Improvement Fund, or CIF for short. The goal of the company was three-fold. Incentivise companies to accept cryptocurrency payments, develop and sell enterprise software to assist businesses in accepting digital currencies, and provide training and consulting services .

This program is a mix of the Bloomberg Terminal Model (showcasing the power of the technology and following up with a revenue generating solution) mixed with a customer loyalty program. CIF provides the education for companies looking to learn and understand about blockchain technology and then follow up by offering both the software required to successfully assist with the business accepting digital assets into their existing eCommerce environment. Under this scheme, companies who sign up with CIF and demonstrate that they are actively accepting cryptocurrencies like Bitcoin as a form of payment, are rewarded with a quarterly reimbursement of CIF’s own cryptocurrency, the CIF Coin. The more business a company does in cryptocurrency, the larger the reward. This CIF Coin reward can then be exchanged for cash on established cryptocurrency exchange platforms, or it can be given out to customers as part of a loyalty program.

The startup has attracted several high profile experts from the financial industry to serve as board members and is currently in the process of preparing for a reverse merger. The merger will allow the company to quickly list shares onto the TSXV.