The number of cryptocurrency ATMs in Belgium and the Netherlands is growing, according to newly released data. Amsterdam is leading among major cities in the Benelux region, with 12 machines supporting digital coin transactions. Luxembourg, which is a global center of traditional finances, is lagging behind in terms of available crypto teller services. 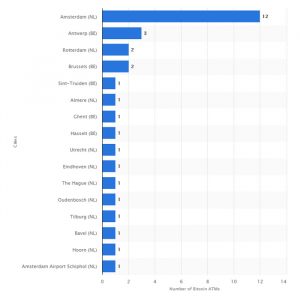 The countries of the Benelux, the heart of Europe in many respects, are not only geographically close and culturally similar, but also enjoy a high degree of economic integration. The European crypto community would very much like to see the same level of cohesiveness when it comes to cryptocurrency adoption in the three states, all founding members of the European Union. Recently published data suggests, however, that they differ in at least one crypto-related aspect – the availability of teller services for digital cash.

A number of cryptocurrency teller machines have been installed in Dutch and Belgian cities in the last few years, with Amsterdam being the pronounced leader. Known for its numerous canals, Holland’s largest city may soon be famous for its bitcoin ATMs too – 12 are currently operational there, according to a report released by Statista. At least two of them support both purchases and sales of cryptocurrencies such as bitcoin core (BTC), ethereum (ETH) and litecoin (LTC).

As of August 2018, Antwerp, the second most populous metro area in neighboring Belgium, is a distant second behind Amsterdam, with 3 BATMs. Brussels, the Belgian capital, and Rotterdam, the second largest Dutch city, both have 2 devices selling digital coins. According to Coinatmradar, one of the machines in Brussels, which is a buy-only device, offers users the opportunity to purchase bitcoin cash (BCH) along with bitcoin core (BTC), ethereum (ETH) and litecoin (LTC).

Twelve other destinations in the two countries have at least one crypto teller machine. These include the cities of Sint-Truiden, Ghent, and Hasselt in Belgium as well as Almere, Utrecht, Eindhoven, Oudenbosch, Tiburg, Bavel, and Hoorn in the Netherlands. The Hague, the seat of the Dutch government, and Schiphol Airport, outside Amsterdam, each have one operational crypto ATM. The devices in the two countries are part of over 3,660 BATMs installed globally as of September 2018.

Neighboring Luxembourg, which has established itself as an international financial and banking hub, is not covered by the Statista report. The Coinatmradar database does not contain information about cryptocurrency teller machines on its territory either. According to another study, conducted earlier this year, 92% of its residents stated they did not possess any cryptocurrency. At the same time, 6% said they had bitcoin core (BTC), and 2% admitted they owned bitcoin cash (BCH), ethereum (ETH) and/or ripple (XRP). The data indicates a relatively limited spread and use of cryptocurrencies in Luxembourg.

In general, residents of the Benelux region own less digital cash than the average European consumer, Statista notes. The biggest number of crypto owners has been found among Dutch people this year, and in the first three quarters of 2017 there were approximately 44,000 bitcoin (BTC) trading transactions in the Netherlands. A poll conducted in the beginning of last year, before the public interest spiked with skyrocketing market prices, showed that 46 percent of the respondents in Holland had heard about digital currencies. 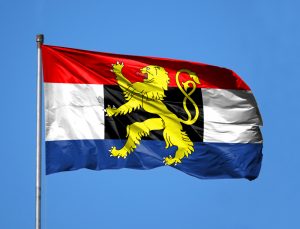 As in most of Europe, the regulatory situation in the Benelux countries needs a more comprehensive approach. However, in the past year authorities in Belgium have mostly issued warnings about fraudulent schemes related to crypto investments. In June, the Dutch financial regulator, AFM, told institutions invested in cryptocurrencies that some of their activities might require licensing. The agency asked to be informed in advance about any expansion of their crypto product offerings. In March, the country’s finance minister called for the development of regional and international crypto regulations but the Dutch central bank stated in August that cryptocurrencies are not money. Luxembourg, which has attracted companies like Bitstamp, Bitflyer, and Revolut with its licensing regime giving them freedom to operate across Europe, has still to decide whether it wants to become a truly crypto-friendly jurisdiction.

Do you think the Benelux countries will eventually adopt favorable regulations for the crypto sector and the fintech industry? Share your expectations in the comments section below.