FundRequest has generated a lot of excitement in the open source community. It has been featured in leading publications, such as Entrepreneur, and bantered about in the ICO world quite favorably. Simply stated, its value proposition is the ability to fund open issues (i.e., bugfix requests) on any project, in virtually any programming language.

The platform seems to have been inspired by the growing penetration of gig economy projects, something the author wholeheartedly supports. Critics of the gig economy argue that this emerging business model is just a way to ‘exploit’ workers by not having to offer them full benefits or long-term salary. Of course, this is pure bullshit.

The gig economy allows professionals to offer their services while maintaining their independence, freedom and creative expression. It may not be for everyone, but it is certainly opening doors to many people who want to escape the mundane of typical 9-to-5 employment.

FundRequest offers common ground for developers, businesses and communities to receive the funding and rewards they need for open source projects. Here’s the cool part: the platform essentially allows you to find a bugfix request or create one yourself, add your contribution to the reward fund and pay out the developer or entity that comes up with the best solution.

Basically, if you need your codes improved, you can create a smart contract for every job and post it to FundRequest. Then a bad-ass developer will do the work and will be paid accordingly. Developers will also be able to see any smart contract associated with a particular bugfix request.

Is this, dare I say, the start of a merit-based economy?

The folks at FundRequest are quite articulate in explaining the impetus for their project. Just take a look at this amazingly precise opening paragraph from the Nov. 1 whitepaper:

“Today, open source software is a vital component in the functioning of governments, large and small companies, and non-profit organisations all around the world. Open source software refers to software that is released to the general public, effectively allowing developers to access the source code, modify it, and redistribute again. Soaring interest in open source development has however unearthed growing pains. A lack of incentives for developers to work on open source projects renders many inactive projects.”

At last check, and until the team can confirm otherwise, FundRequest is still finalizing its technology stack. What we do know is that the platform will support MetaMask, which allows users to access their Ethereum accounts independently of ether nodes. Through MetaMask, FundRequest will allow users to fund smart contracts – essentially from their browser.

If you have 2:40 to spare, check out the company’s GitHub Integration Demo on YouTube. It’s one year old, but still conveys the general precepts of the project.

FundRequest will issue a FND token to catalyze the platform’s development and user experience. The utility token essentially allows the company to maintain fair play. The integration of a utility token also ensures that FundRequest does not rely on a third-party token for its operation.

The token sale is scheduled for Nov. 20 and will be restricted to whitelisted participants who have passed KYC compliance. If this isn’t you, be prepared to meet more and more KYC/AML standards in the future.

The token raise will faciliate FundRequest’s development, operations and marketing costs and also factor into its contingency budget. The full breakdown is provided below, courtesy of the company whitepaper. 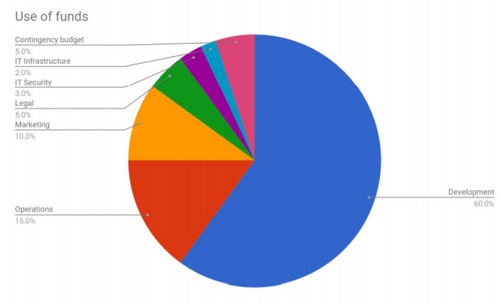 The FundRequest platform will also feature the so-called SkillToken, which is a skill-specific, non-transferable token that is rewarded after developers complete a request from the SkillToken Factory. This is the decentralized system that manages SkillTokens, which are dispensed to developers with proven track records. According to the company, “The fees awarded to the SkillToken Factory are paid in FND tokens and will be burned.”

The open source project is surrounded by a talented team of technical Belgians led by Karel Striegel. The founder and CEO of FundRequest is the main architect of the project. He has 12 years of experience in DevOps and systems engineering, including plenty of entrepreneurial experience. Striegel retains a team of five core staff, including a CTO, business analyst, product manager, ethical hacker and core developers.

The advisory team has been recruited for their expertise in token launch economics, financial and marketing expertise.

Although the team may not be as well known as other ICO projects, it is made up of consummate professionals with full LinkedIn profiles.

It’s difficult not to paint a rosy outlook for FundRequest. They are capitalizing on one of the biggest developments in the technology industry – open source – and making it extremely easy to do so. I.T. professionals, who do not include the author, may be able to offer a more critical read of the company’s technical requirements. However, we haven’t found much criticism concerning FundRequest’s tech specs.

FundRequest may still be in the early development phase, but its business model is a potential hit. The growth of open source projects, combined with the need for on-demand solutions, make FundRequest a worthwhile consideration for ICO investors. There are some question marks about implementation, scale and ROI, so investors should carefully temper their excitement with a dose of reality about what they hope to achieve financially.

All things being considered, FundRequest is one of the most exciting projects we’ve seen in a long time. This, combined with the benefits discussed above, warrants a 7 out of 10.