Wall Street strategist Bob Doll said that the record-setting bitcoin price rally may be predicated on investor speculation, but that does not detract from the fact that it is on an “amazing run”.

“‘With bitcoin, why do you need the stock market?’ has been the saying of late,” Doll said. “I confess it’s an area of that to me feels speculative, but you might call me old or old-fashioned. It’s been an amazing run, has it not?”

Despite several severe corrections, the bitcoin price has sustained its upward trajectory throughout the year. However, the markets have gone absolutely berserk in the fourth quarter. Since entering the quarter at $4,341, the bitcoin price has leaped by more than 120 percent. Monday morning, it reached a new all-time high of $9,771, placing it within $250 of entering five-figure territory for the first time.

At present, the bitcoin price is trading at a global average of $9,690, according to data obtained form CoinMarketCap. Bolstered by bitcoin, the combined market capitalization of all cryptocurrencies has become greater than the valuations of either Bank of America, Wells Fargo, or Visa. 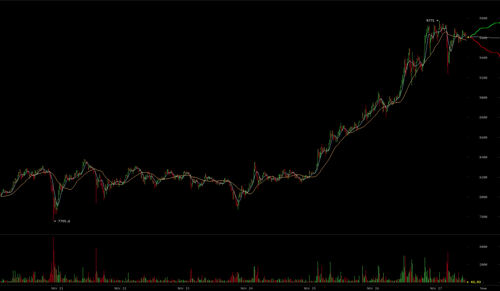 To Doll’s point, bitcoin’s recent explosion appears linked to speculation that Wall Street investors are placing the final touches on plans to make strategic entries into the cryptocurrency markets, beginning with bitcoin futures trading on U.S. derivatives exchange CME but eventually extending to holding the assets directly, perhaps through a third-party storage service such as Coinbase Custody.

Reflecting on this quarter’s dramatic market movement, ShapeShift CEO Erik Voorhees advised investors with significant cryptocurrency holdings to take some profits and pay off their consumer debt. He also cautioned euphoric investors to not take on more debt to buy bitcoin or other cryptocurrencies (even though this gamble has paid off in the past).

If you have a lot of crypto, and also significant debt, strongly consider selling some crypto at these all-time highs and paying down debt (completely if possible). Corollary: don’t go into debt to buy crypto at these prices.

Nevertheless, many analysts believe that bitcoin will continue ascending to new heights for the foreseeable future. Fundstrat co-founder and market strategist Tom Lee, for instance, recently raised his mid-2018 bitcoin price target to $11,500, while Standpoint Research’s Ronnie Moas has set his 2018 target at $14,000.