Bitcoin put up an epic rally this week, upstaging equities and political developments centered on tax and the Federal Reserve. An impressive rise in crude oil also made headlines, as investors continued looked on favorably to speculation that OPEC is considering extending its production cuts well into 2018.

Bitcoin posted one of its more dramatic rallies this week en route to fresh records. BTC/USD surged to $7,000 and beyond, adding a staggering 24% over a five-day stretch. At press time, BTC/USD was trading at $7,213 for a market capitalization of $120 billion. 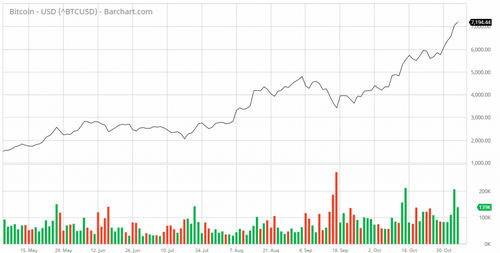 A multitude of forces have combined to give bitcoin a market cap that rivals some of Wall Street’s biggest companies. Chief among them is the prospect of greater institutional cash flow following news that CME Group is planning to launch BTC futures contracts. In doing so, CME joins rival CBOE in embracing digital currency.

Bitcoin’s rally failed to generate additional buying interest in altcoins this week. Though the altcoin market improved on Friday, the likes of Ethereum, Ripple and Litecoin struggled throughout the week.

Wall Street put up steady gains this week, as all three major benchmarks closed at record highs. The Dow Jones Industrial Average climbed rose 0.4% during the week to finish at 23,539.19. The large-cap S&P 500 Index eked out a five-day gain of 0.2% to close at 2,587.84. Meanwhile, the tech-driven Nasdaq Composite Index added nearly 1% to settle at 6,764.43 on Friday.

Technology stocks continued their upward climb after being responsible for 75% of equity returns in October.

Implied volatility also dropped to their lowest level since the summer, as investors kept their portfolios heavily invested in the stock market. The Chicago Board Options Exchange (CBOE) Volatility Index plunged 8% on Friday to close at 9.14. The so-called “fear index” trades on a scale of 1-100, where 20 represents the historic mean. 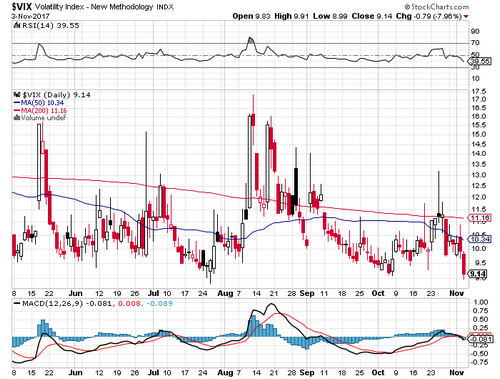 On Thursday, U.S. President Donald Trump  nominated Jerome Powell to lead the Federal Reserve once Janet Yellen’s term expires in February. The move ensures continuity in terms of monetary policy only without Yellen, a Democrat who was on the outs with the current administration.

“Today is an important milestone on the path to restoring economic opportunity to the American people,” Trump said in a press conference Thursday.

“He’s strong, he’s committed and he’s smart, and if he is confirmed by the Senate, Jay will put his considerable talents and experience to work leading our nation’s independent central bank,” Trump said in reference to Powell.

Powell is a current governor with the Fed, and is a voting member of this year’s Federal Open Market Committee. Speculation surrounding his appointment upstaged the Fed’s two-day policy meeting that ran until Wednesday. As expected, policymakers kept interest rates on hold until December.

Oil prices continued to soar this week, reaching their highest levels of the year on an improved demand outlook and signs that peak supplies were simmering down. U.S. West Texas Intermediate (WTI) for December settlement added 3.2% for the week to close at $55.64 a barrel.

The January futures contract for Brent crude added 2.7% for the week to finish at $62.07 a barrel.

Crude prices received a boost on Friday after rig-services provider Baker Hughes reported another weekly drop in active rigs. Drillers operated 11 fewer rigs last week, most of which was due to a loss in the number of active oil rigs. That was the largest decline this year.

U.S. Jobs Market Back on Track

It has been a positive month for the U.S. labor market after two devastating hurricanes took a knife to the official jobs numbers.

On Thursday, the Labor Department said weekly jobless claims fell to the lowest level in over 44 years. Twenty-four hours later, the same department announced the creation of 261,000 jobs for the month of October. Though far below forecasts of 310,000, the prognosticators discounted a sharp upward revision during the previous month. As it turns out, the economy created 18,000 jobs in a hurricane-ridden month. The original report showed a decline of 33,000 jobs.

Fewer layoffs and more hiring are positive signs for an economy that has shifted into higher gear over the last eight months. America under Trump has been more confident and far more optimistic about the future – at least when measured along certain economic indicators and the stock market. The president is still dealing with an abysmal approval rating, although that could be attributed to sharp partisanship on the part of U.S. voters.