Public chains were initially not designed to store and use large sums of data. Currently, many blockchain projects must resort to conventional cloud storage providers for storing of large sums of data. This makes the developers design complicated work-arounds and it is not working well with the idea of open source development and community driven enterprises.

This is a submitted sponsored story. CCN urges readers to conduct their own research with due diligence into the company, product or service mentioned in the content below.

Genaro has attracted support from seven famous blockchain foundations including BlockAsset. It is now the revolution to move from “Cloud” to “Blockchain”. The network believes that only when Blockchain is used in the real data can DAPPs be as useful as Internet APPs. It is a development project based in Singapore and pioneered the concept of Blockchain 3.0. The Blockchain concept will solve the problems that come with conventional methods of storing data

Genaro is a network that stores data and deploys smart contracts simultaneously. It is the first Turing Complete Public Chain plus a Decentralized Storage Network. A user will have a permanent and private method of storing their data, videos, documents and any type of file. This will be a secure way since one will be required to use a private key in order to access any data. Genaro provides a blockchain infrastructure for other blockchain based solution providers as a replacement for cloud based storage. The blockchain allows for security and safety of immutable transaction records

Genaro works online and locates the closest nodes to the user for them to store their data making it fast for one to access their data. The network is less expensive since it uses unused storage space and distributes the cost of bandwidth and electricity among the devices

Since the launch of its blockchain 3.0 it has recently been invited to join the Association of Crypto Currency Enterprises and Startups in Singapore (ACCESS) which seeks to have clear and open dialogue with the members including regulators. 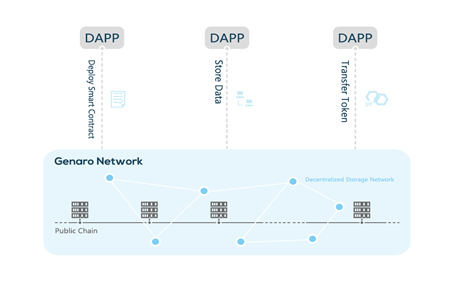 The Genaro Network Public Chain is made up of the receipt maker and the receipt prover. In the Receipt Maker, each block is generated by storage activities and the system uses PoS (Proof of Stake) as the consensus method. The receipt makers continue to be selected from the nodes during the operation of the whole blockchain and produce corresponding receipts for storage activities. The Receipt Prover in the public chain is the participant who mainly contributes their calculation power to the “challenge” function in Genaro Network. 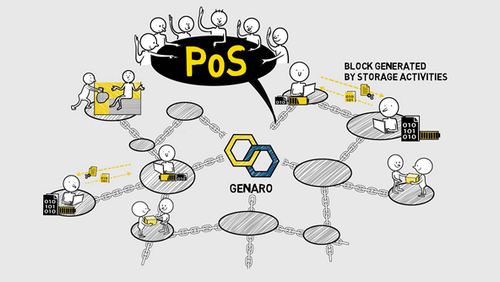 The aim of Proof of retrievability (PoR) is to help the user to verify that the archives do not remove or alter files before retrieval. The PoR protocol encrypts the file and randomly embeds a set of randomly valued check blocks known as “sentinels”. The person verifying challenges the prover by specifying the positions of a set of “sentinels” and asking the prover to return the associated sentinel values. If the prover has altered or removed any file there is high probability that it will suppress several number of sentinels. Genaro decentralized storage network creatively uses SPoR(Sentinel Proof of Retrievabilty)as consensus to increase file transfer speed and public chain scalability. User data is cut into pieces, encrypted and stored redundantly onto decentralized nodes.

The Hub and The Accelerator 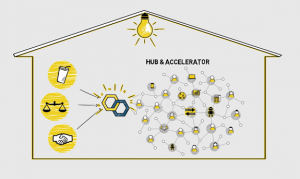 The Hub is different from the network in that it seeks to make profit by offering services to the Genero users and the external community. The Hub will use GNX tokens in providing these services. The users of the Genaro network will pay through the tokens and the external community which will be in need of the hub services will use the GNX tokens. The Hub will offer services such as lodging, food and drinks and other services that will cause interaction between the Hub members.

The key differences between the Hub and other coliving/coworking spaces will be the Accelerator. The accelerator is an incubator like designed to foster the blockchain enterprises that uses the Genaro Network. It will run in groups of 4-6 people/teams and the batches will receive shared services such as training, legal and government support among others. The Accelerator will focus on a number of big data application and other industries such as small tech industries. The accelerator increases the impact that the Hub has compared to other coliving/coworking spaces

Genero will launch their ICO on 17th November, 2017  to enable them to develop their network. There are a total of 700, 000, 000 Genero Token (GNX). 85 % of these tokens will be issued to the public while 15% of them will be issued among the team. Users could participate GSP Whitelist to reserve discounted GNX and get special airdrop offer since 17th October, 2017. GSP will end when all the 31% tokens are given to contributors or 70,000 blocks run  out whichever comes early. Any remaining tokens will be rolled into the community fund for future strategic allocation following listing of GNX. 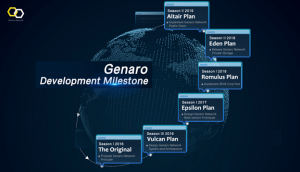 There is a Genaro Community Evangelist plan that is to give both Genaro Internal Team and the Genaro Community a chance to work together to drive the Blockchain Revolution. The work of the Community evangelist will be to spread the message of our  products and software which will provide a link between the Private Development community and our team in order to share insights. The Evangelist will also interact with the community in the social media platforms and manage groups and subgroups that will be formed within the community.

An Evangelist will have to own at least one of the known cryptocurrencies and also have knowledge about the Genaro Network. They are also required to have blockchain industry resources including investors who they are willing to introduce into the network.