Younger Americans are far more likely to invest in ethereum, bitcoin, and other cryptocurrencies than people from older age groups.

According to a survey commissioned by student loan consolidation service LendEDU and conducted by OnePoll, American adults between the ages of 18 and 34 are much more aware of cryptocurrencies than older generations and are consequently much more likely to invest in crypto assets.

Following up a September survey that gauged interest in Bitcoin, LendEDU asked 1,000 U.S. citizens about their familiarity with ethereum and ripple, the second- and third-largest cryptocurrencies by market cap, as well as initial coin offerings (ICOs). 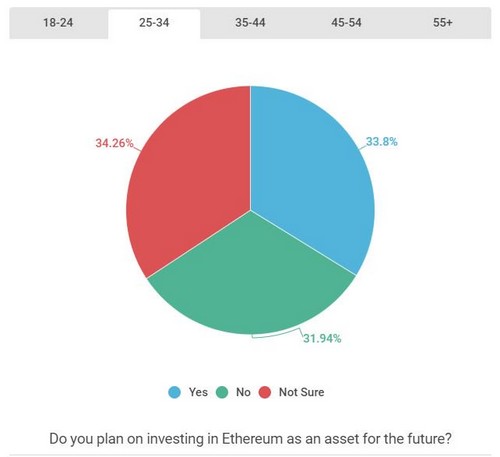 33.8% of Respondents Between the Ages of 25 and 34 Plan to Invest in Ethereum | Chart from LendEDU

LendEDU also asked respondents about their familiarity with initial coin offerings, which are blockchain-based fundraising events that have existed since 2013 but did not permeate the mainstream consciousness until this year. These results were not broken down by age, but about 25% of people indicated that they had heard of ICOs, and 15% added that they plan to contribute to an ICO in the future. Twenty-one percent of participants, however, replied in the affirmative when asked if ICOs were illegal.

Although it is unclear how many respondents will follow through with their stated intentions to invest in cryptocurrency, their openness to digital assets serves as partial confirmation of the thesis that younger investors will likely use bitcoin and other cryptocurrencies as stores of value in place of gold and other precious metals. Based on this observation, Wall Street strategist Tom Lee predicts that bitcoin will claim at least 5% of gold’s market share within the next 5 years, raising the bitcoin price to a conservative value of $25,000.

Crypto Secularizes Wealth by Returning Power to the People

Wyoming Bill Would Clear, the Way for Crypto Custody at Banks