Bitcoin is accustomed to taking flak from non-believers. It’s been declared dead more times than most people care to count, and will continue to be written off long after dissenting CEOs have conceded defeat and quietly bought BTC. The latest group to take potshots at bitcoin aren’t external actors with little understanding of the protocol, however – they’re insiders who were once its biggest supporters. The cause of much of the commotion? Scaling.

A Schism in the Church of Bitcoin

If there’s one thing everyone can agree on, it’s that the blockchain is in desperate need of an upgrade. As new users pile in by the hundreds of thousands, the network has struggled to contain the strain. In the early days of bitcoin, few balked at a transaction taking 30 minutes to confirm. But for businesses today seeking to use bitcoin as a global payments system, that wait must seem as interminable as downloading a movie in the dial-up days. 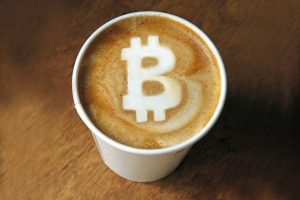 Of course, the scaling debate isn’t just about speed: it’s also about fees. When Segwit was implemented back in August, one feature it hindered was near-instant transactions for small purchases such as a cup of coffee. Exacerbated by rising fees, bitcoin has become unsuitable for small transactions. As the bitcoin network has struggled, bitcoin cash with its 8MB blocks has gleefully stepped up to the plate and proffered itself as an ideal candidate for fast and low-cost transactions.

With bitcoin fees hitting an all-time high, over 130,000 unconfirmed transactions in the mempool and some transactions taking days to complete, bitcoin is screaming out for a scaling solution. Critics have called bigger block sizes an arbitrary and inelegant scaling approach that’s simply kicking the can down the road. It appears to have done the trick for bitcoin cash so far, however, and will soon be working for Dash, whose latest release includes an upgrade to 2MB blocks.

There’s More Than One Way to Scale a Coin

The alternative for bitcoin is to implement off-chain scaling. Such solutions, including use of the Lightning Network, are every bit as controversial as Segwit, inviting accusations of dangerous centralization that gets away from the “true spirit” of bitcoin. Admittedly, off-chain transacting occurs all the time on bitcoin exchanges without anyone complaining, but formalizing this into Bitcoin Core would be a different matter. 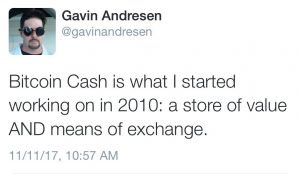 Should bitcoin be a means of exchange? “Yes” says Gavin Andresen.

A Plague On Both Your Houses

Segwit, which was supposed to ease some of the blockchain congestion, has become a poisoned chalice, with its detractors calling it “an over-engineered mess”. Factions in both camps – BTC and BCH – have an intense dislike of Segwit for their own reasons, much of which is ideological.

In the wake of Segwit2x’s cancelation, Jihan Wu tweeted: 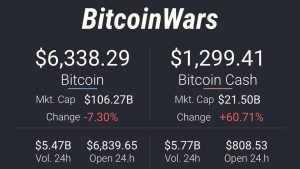 His pleas for peace seem to have fallen on deaf ears however, with the conflict seeing bitcoin legacy supporters labeled “Segwetters” by some detractors, and the former laying claim to “the real bitcoin”. There’s even a Bitcoin Wars app which reinvents the two coins’ trajectory as a titanic fight to the death.

Bitcoin enthusiasts are fiercely passionate about cryptocurrency. While this is often a force for good, spurring unsung developers to perform late night code commits and BTC evangelists to spread the word, this zealotry can also be a force for bad, as technical discussion gives way to mud-slinging.

As a consequence, what should be a purely technical discussion – “How do you scale a digital currency so it can process thousands of transactions a second?” – has degenerated into a largely political one. Until the church of bitcoin can get its house in order, onlookers can only watch in bemusement. The greatest danger to bitcoin, be it cash or legacy, isn’t external – the real menace lurks within.

NASA, committed to lunar exploration, is shutting down a moon rover mission