A recent survey of 10,000 men and women across Japan shows that 88% of them have heard of bitcoin. Among those that have bitcoin, 47% said that they have used it in retail stores but long-term investment is most respondents’ main reason for purchasing bitcoin.

88% Have Heard of Bitcoin

Global market research company with agencies in over 90 countries Macromill Group recently conducted a survey on the awareness and usage of bitcoin among the Japanese. Ten thousand men and women aged 20 to 69 across Japan participated.

The Japanese government legalized bitcoin as a method of payment in April. In July, they declared the sale of bitcoin free from consumption tax. Since then, more Japanese have been exposed to bitcoin online and offline, as more merchants start accepting the digital currency and promoting them in the process.

Overall, the cognitive rate was high, 88%. 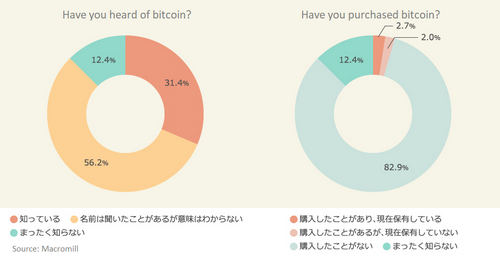 As more people start using bitcoin and becoming aware of the digital currency, more merchants are also attracted to it, ranging from small ma and pa shops to large retail chains. Electronics giant Bic Camera, for example, started accepting bitcoin at all of its locations across the country in July due to popular demand. The bitcoin exchange Coincheck claims that over 5,000 merchants in Japan accept bitcoin currently, with more being added regularly.

When respondents who have bitcoin were asked whether they have used it to pay for goods and services at retail stores, 47% said that they have while 53% said no.

When asked what type of businesses they would like to see accept bitcoin payments, the most common answer was “convenience stores,” which 43% want, followed by “e-commerce sites,” preferred by 40% of respondents. 31% said “restaurants and cafes,” 29% “electronics chain stores” and 28% “supermarkets.”

Among the respondents who are currently holding bitcoin, 42% said that they purchased because “I was interested in virtual currency.” The same percentage of respondents said, “I thought that bitcoin will spread in the future.” Meanwhile, 33% replied, “I thought it would be profitable” and 30% said, “I like new things.”