A South Korean broadcast television channel has produced and broadcasted a reality TV show where two movie stars competed to live on bitcoin for a week. Set in South Korea and San Francisco, the actors were challenged to find merchants who accept bitcoin directly.

Also read: Bank of Korea Criticized, Does Not Recognize Bitcoin as Currency

The South Korean mainstream broadcast TV station, Asia Economic TV, has produced and broadcasted a reality show that challenged two movie actors to live solely on bitcoin for a week each. The name of this survival challenge show is loosely translated as “Stay alive for a week with bitcoin.” It took place in two countries with very different levels of bitcoin adoption.

Actor Kim Bo-sung spent a week living on bitcoin in South Korea, while painter and actress Yun Song-ah did the same in San Francisco, United States. Their Wikipedia pages show that Kim has been in 34 movies and 13 TV series, while Yun has been in 8 movies and 10 TV dramas. They have also both won numerous awards. 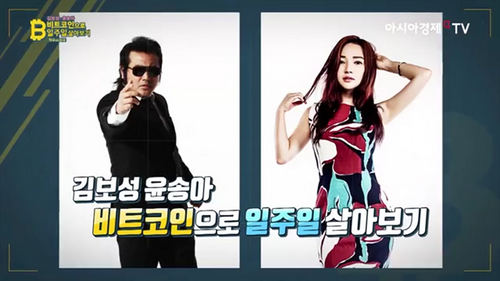 The show contrasts how the two stars survived on bitcoin in the two locations. The rules stated that they must find merchants that accept bitcoin directly and only use bitcoin for the week. The show followed them as they spent it on food, shelter, travel and all other activities during that time.

Kim Bo-sung described himself as a “Bitcoin outlaw,” BNT News reported, adding that the program showed him using bitcoin such as at an optician’s office, a florist, a campground, and a chiropractor. It often took him a while to find a vendor that accepts bitcoin in South Korea.

Yun Song-ah, on the other hand, enjoyed the high adoption rate of merchants in San Francisco. She was able to find many stores that accept bitcoin as well as bitcoin ATMs to get dollars out to spend. She “sketched the Golden Gate Bridge, took-in sightseeing at Fisherman’s Wharf, felt the hippie culture in the streets of Mission Street and Hate & Ashbury Street, and visited the Coppola Winery, run by Francis Coppola,” the news outlet described.

The producer explained that the show demonstrates completely different survival styles since San Francisco is among the places where bitcoin is widely used, whereas it is the opposite in South Korea. The last episode of this series was aired last week.