A South African author has published an open letter imploring Atul and Ajay Gupta to use bitcoin as a means to circumvent the banking embargo targeting the family. The Gupta family came to South Africa from India during the 1990s, and soon built a business empire – spanning the media, mining, and computer hardware industries. Recently, the Guptas have been the target of accusations of corruption owing to ties to South African president Jacob Zuma. 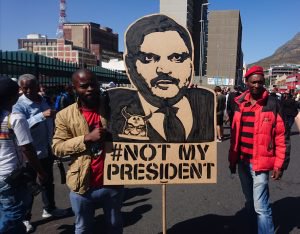 Image from a protest against Atul Gupta in Cape Town

As a consequence of accusations of money laundering and suspicious transactions, numerous South African and international banking institutions have recently shut down Gupta-owned accounts.

South African author, Philip Haslam, has published an open letter to Atul and Ajay of the Gupta family, imploring them to adopt bitcoin as a means to circumvent the banking embargo that currently targets the family. Philip Haslam is the author of ”When Money Destroys Nations” alongside Russell Lamberti, which focuses on the social toll of hyperinflation – drawing heavily from Haslam’s work on Zimbabwe.

Haslam’s letter opens by stating “I have been following the recent media attention around your banking problems with some interest. What a dilemma you find yourself in! Banks won’t bank with you even when you own shares in them and own certain politicians who regulate those banks.”

The Gupta family have been accused wielding as “shadow state” in South Africa. The family has long held ties to Jacob Zuma – who has held office as president in South Africa since 2009. A recent academic reporthas described the actions of the Zuma and Gupta families as having “started off… as collu[ding] in relatively low-level corruption” before their activities “evolved into state capture and the repurposing of state institutions” following Zuma’s ascension to the presidency.

Haslam argues that there will be no way out of the banking embargo for the Gupta’s, who are currently barred from accessing services with two international and four South African financial institutions. Haslam argues that a bank that continually processes suspicious transactions risks being “cut out of global clearing activities [and] since local clearing houses… rely on being connected globally,… worldwide financial authorities… have the power to stop a bank from making local South African payments from one bank to another.” Haslam tells the Gupta’s that “global banking authorities have more power than you realize and it means you will likely face increasing problems with banks even back in India as they blacklist your transactions… Unfortunately for you, you cannot capture the IMF or Federal Reserve.”

“For as Long as You Play Using the Systems They Control, They Will Make Banking Life Difficult for You” 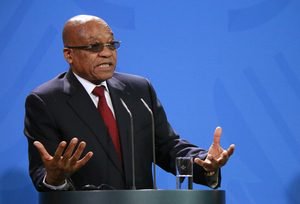 Haslam asserts that the “only viable option” for the Guptas is to turn to cryptocurrency. Halam argues that the Guptas “could arrange for bitcoin and other cryptocurrencies… to be made legal tender in South Africa… You could establish an independent currency system, with people paying bitcoin at the tills and even paying tax in bitcoin. You would have no need of the banks.”

Haslam concedes that he has “ulterior motives” in recommending that the Guptas adopt cryptocurrency, stating that “with a fixed money system, [their] corruption will be severely reined in.” Haslam accuses the Guptas of seeking to gain “control of the South African Reserve Bank… to print money for [them] selves.” If the nation were to adopt bitcoin, Haslam argues, the cycle of the “government… print[ing] money to repay lenders” would be broken through bitcoin’s attribute of possessing “a fixed supply of money.”

Haslam concludes by offering the Guptas a final “special benefit” of adopting bitcoin – “revenge”. Haslam tells the Gupta’s that “the very banks who closed your bank accounts and made you bleed are the ones who would feel the pain in all of this. Bitcoin as a money and banking model would inherently compete with the business of the banks.”