2017 has seen a significant increase in the number of real estate listings made available for purchase using bitcoin. The proliferation of these listings does not appear to have been matched with buyer demand to pay using cryptocurrencies, suggesting that some true estate companies may be attempting to jump on the bitcoin bandwagon solely in an attempt to generate publicity for their firm.

In recent months there has been an increase in real estate companies promoting listings that can be purchased using bitcoin. From multi-million dollar mansions to more modest family homes, real estate companies from across the globe are rushing to cash in on the media hype that now surrounds cryptocurrencies.

Last month, a London mansion went on the market with the owner asking for approximately £17 million ($22.38m USD), expressing a preference for offers made in bitcoin. Lev Loginov, the co-founder of the property firm listing the mansion, London Wall, told the media that the property had seen considerable interest. He stated: “Last week we had 15 viewings. It’s coming from Asia. I don’t think we’ve had anybody older than 30. It’s lots of young people who got involved in cryptocurrencies at an early stage. Most of them made money from mining cryptocurrencies, and basically they’re looking to acquire assets.” 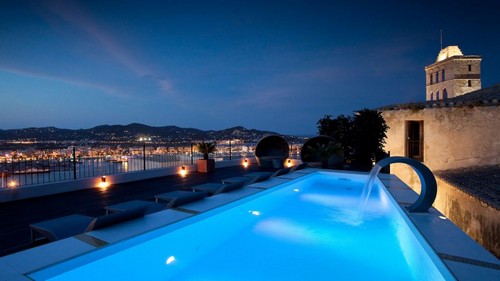 Properties are Being Advertised With Prices in Bitcoin Throughout the World

Earlier this month, a property recognized as a World Heritage Site by The United Nations Educational, Scientific and Cultural Organization (UNESCO) in the Spanish resort town of Ibiza was made available for sale with an asking price of 1,850 bitcoin ($13.26 million USD). El Palacio Bardaji’s website states that the property is “an 18th-century palace, built overlooking the ancient town on the highest and most exclusive point of the city of Ibiza. The historic building has undergone recent maintenance, and now boasts 6 bedrooms, 5 bathrooms, a roof terrace with swimming pool, a garage, and a guest apartment.”

A historic lodge in Wisconsin has recently been listed with an asking price of 40 bitcoins – which currently equates to approximately $287,000 USD – with the owner refusing to consider offers in fiat currency. Journal Sentinel describes “the former Elks Lodge, a downtown landmark built in 1904, [as] a large Queen Ann-style structure that sits two-and-a-half stories high and also houses the oldest sanctioned bowling alley in the United States.”

With the media’s current fixation on all things crypto showing no signs of slowing down, it is likely that real estate listings will continue to use bitcoin as a means to generate attention.