On the weekend of January 18 & 19, more than 1000 Bitcoin and blockchain community members will converge on Miami for a historical conference aimed at driving cryptocurrency from niche to mainstream. Now in its sixth year, The North American Bitcoin Conference is the longest running and most attended finance conference for the Bitcoin, finance, and cryptocurrency industries. 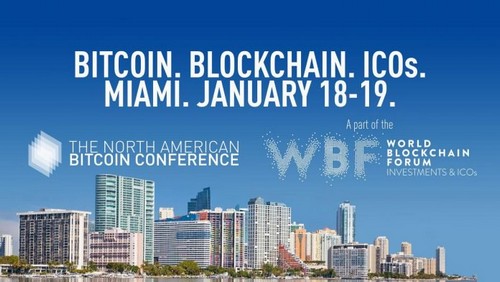 Building on the recent successes of conferences in London, Los Angeles, Chicago, and Dubai, The 6th Annual North American Bitcoin Conference, as a part of the World Blockchain Forum, will feature a star-studded lineup of over 30 world-class presenters, including technology veterans, and founders of companies which have collectively raised over $3.1 billion in Initial Coin Offerings (ICOs). Past events have been covered in the Wall Street Journal, Forbes, Fortune.com, Bloomberg, and other mainstream media outlets.

The two-day conference, taking place in sunny Miami on January 18th and 19th 2018, will focus on themes around the future of Bitcoin and blockchain technology, with a special focus on investments, successful past and future ICOs, legal implications and regulations, and how decentralization is disrupting the banking industry.

The first fifteen speakers have been announced including:

Keynote’s founder Moe Levin says, “This conference comes at a pivotal time as innovation forces us all to make wise investing decisions. With an influx of new opportunities, and hundreds of new ICOs, Keynote wants to give our attendees the opportunity to meet the people and product they’ll be investing in, discuss white papers, and get a better understanding of the fast-expanding blockchain ecosystem. We’re also excited for our attendees to meet and interact with our sponsors and exhibitors, who are the greatest blockchain start-ups active at the moment.”

Tickets are available at btcmiami.com/tickets.

About Keynote
Keynote was launched in 2012 by blockchain strategist Moe Levin. Further information and details about Keynote and the event can be found at btcmiami.com