A principal regulator in the Philippines has announced: “The direction is for us to consider this so-called virtual currencies offerings as possible securities in which case we will apply the Securities Regulation Code,” the country’s Commissioner, Emilio Aquino, of its Securities and Exchange Commission (PhSEC), signaled on 21 November. Movement towards proper legalization comes after much consideration and monitoring, along with consultation with its central bank.

Perhaps looking to its prosperous neighbor, Japan, the Philippines seems ready to welcome a cryptocurrency revolution within the archipelago.

Agricultural firm Calata Corp. was recently stripped from its formal stock exchange for improprieties, and has since taken the latest craze in public fundraising, the initial coin offering (ICO), hoping to market Calcoins. ICOs are enjoying massive growth nearing upon 4 billion USD this year. It appears Philippine regulators are aware.

Commissioner Aquino continued, “This initial coin offering — depending on, as said, the facts and circumstances in which the offering is made especially in raising capital — may be considered as securities, in which case they cannot just be offered without registering with SEC.” 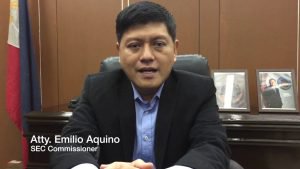 Bitcoiners are philosophical about registries, as though they do tend to slow innovation, they’re also better than a hostile ban. The PhSEC has been monitoring cryptocurrencies for a while.

“We have seen particularly in the social media sites that there are offers of initial coin offerings, most popular of which, of course [are] bitcoins and ethereum … but [there are] new ones which may be considered as securities,” the Commissioner added. “That’s the direction we’re taking, basing on the present regulations passed by the US SEC, our other counterparts in Malaysia, Hong Kong and Thailand.”

The PhSEC Commissioner explained conversations with its central bank, BSP, were also being had in earnest. “There are at least five or six companies which have already been registered and endorsed by the BSP but these are limited [only] to money services businesses to address remittances being done by OFWs (overseas Filipino workers) to bring down the cost,” Commissioner Aquino said.

BSP Governor Nestor Espenilla, Jr. suggested they “have an open-minded approach to fintech (financial technology). This means that we take a very active role in ensuring that our policies provide opportunities for innovation.”

“Today, there are two virtual currency exchangers registered with the BSP and several more are under evaluation,” the central banker emphasized.

At year’s start, BSP issued regulations for exchanges which included anti-money laundering provisions. The effort then, as now, was to keep the country liquid with regard to remittances. Increasingly, more people in countries with tighter capital controls are using bitcoin, for example, as a way to send money home.

“It’s very simple, what they are allowed to do is to exchange a cryptocurrency or bitcoin into peso equivalent,” the BSP Governor stated frankly. “It’s just moving from normal money to cryptocurrency.”

In August, The Manila Times Online also reported Mr. Espenilla saying “the central bank was now regulating the operations of two bitcoin exchanges, which he described as ‘local-based’ with ‘international roots.’”