Bitcoin markets have been hovering around some new price territories recently, as the currency reached a few all-time highs over the past 72-hours. BTC reached a top of $7,997 on the popular exchange Bitstamp, and has come awfully close to $8,000 throughout many other trading platforms. Cryptocurrency enthusiasts are steadily waiting for bitcoin to surpass the $8K barrier and capture a whole new price range.

It’s been a week since bitcoin dropped below the $6K region last weekend and the end of this week shows — a whole new ball game is being played. Bitcoin markets have spiked quite a bit as bulls have been trying to charge past the $8K zone for a few days.

Presently, the price is trading between $7,700-7,800 across multiple exchanges with a 24-hour trade volume of $3B. Big money is flowing into bitcoin from Japan once again, as the yen is commanding over 67 percent of the global BTC volume. The USD is following the yen’s lead with 17 percent, and the South Korean won has around 9 percent of bitcoin’s trade volume today. The top five exchanges dominating the majority of trade volume include Bitfinex, Bithumb, Bittrex, GDAX, and Hitbtc.

Looking at charts for the past two days, bitcoin has been hovering around $7,700-7,800 after reaching its new highs. There has been some consolidation and order books show stiff resistance in the $8K region, which will get even tougher at $8,200. The sideways action has allowed traders to plant new positions at higher playing fields. Right now, the 100 Simple Moving Average is coasting along well above the 200 SMA, indicating we are still seeing a buyers market.

However, trade volume is weaker as volumes have dropped by $2B over the past 24 hours which may be showing signs of market exhaustion. At the moment the stochastic indicates some more upside play action may happen, and the RSI reveals some possible oversold conditions. If bulls push past $8,000 range, watch for the two key regions at $8,200 and $8,600 as there will be resistance in these areas. If buyers get exhausted and bears start clawing the market again, there are solid foundations around $7,400 and 7,200 if things get uglier. 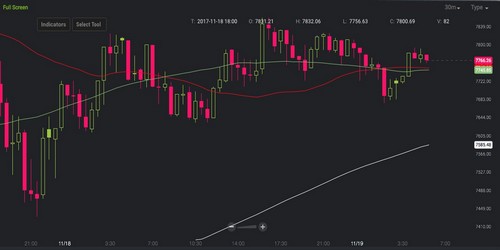 A Quick Glimpse at Altcoin Markets

The top few altcoins are all in green right now with upward gains of around 3-8 percent. Ethereum (ETH) is grabbing the 8 percent increase today with a price around 361 per ETH. This is followed by Ripple (XRP) which is priced at $0.22 per token and is up by 2 percent. Litecoin (LTC) is up by 5 percent as each LTC is selling for $70 at press time. One notable altcoin rise this week is NEO which is up 14 percent capturing a value of $43 per token. 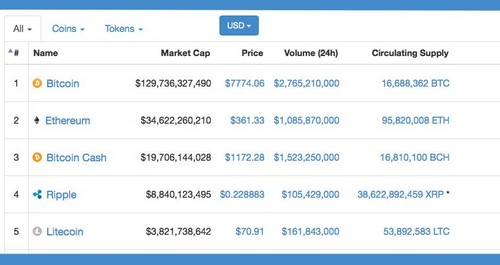 This week bitcoin cash (BCH) has seen a significant increase after dropping below the $1K region. Following this event, BCH rebounded back up to the $1300 price range. Right now, one BCH is averaging around $1170 per token, but markets are down 5 percent since yesterday. Bitcoin cash markets have about $1.9B in global trade volume, with the South Korean won still taking the lion’s share. There’s some good arbitrage at the moment between the Korean exchanges Coinone and Bithumb. The top five exchanges trading the most BCH today by volume include Bithumb, Coinone, Bitfinex, Bittrex, and Hitbtc.

Looking at BCH charts also shows theres been some pretty consistent 36-hour market stability, but there’s heavy resistance in the $1300 region. The short-term 100 SMA is a touch higher from the long-term 200 SMA indicating a good chance for more upside swings. Expect some resistance in the $1300 area again and even more so around $1400 territory. Both the RSI and the stochastic reveal there’s definitely room for upper bounds in BCH value. The price could surpass $1300-1400 again in the near future, but it also could slide back to $1100-1000. 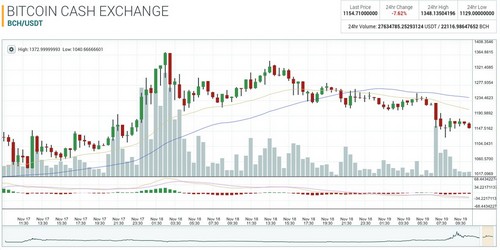 Bitcoin Cash is averaging around $1,170 per BCH.

As far as markets go, many traders have moved their attention away from the scaling debate and forks, and seem to be focused on better long-term positions. Traders are optimistic in regard to bitcoin exceeding the $8K territory, as many believe we will see $10K by the year-end. Speculators think the upcoming futures contracts from CME Group will bolster the price, alongside Cboe entering the game as well. So far LedgerX has already been processing millions of dollars worth of futures products, and at least one trader has wagered a long position predicting that bitcoin will hit $10K by December 28.