The price of bitcoin (BTC) has been on a bearish run over the past 72 hours, after reaching $7,900 the day the Segwit2x fork was ”canceled”. Since then bitcoin’s market cap has shaved off over $20B, and the price per BTC is hovering just above the $6,475 range. Moreover, while bitcoin has been dipping, at the same time bitcoin cash (BCH) has been rallying hard as the currency has reached a high of $1,300 per BCH on November 11.

Market action on Saturday, November 11 is mirroring the day before, where traders saw bitcoin markets plummet over 7 percent in value to a low in the $6,400s range. When markets in Japan and South Korea opened, the price rebounded a touch coming close to capturing $7K, but traders failed to reach that point. During the earlier hours of Saturday morning, bitcoin’s price started diving again, dropping seven legs down to a low of $6,300. BTC trade volume is still holding steady and has been capturing roughly $5B or more in trades over the past 72 hours. The top five exchanges pushing significant trade volume this weekend include Bitfinex, Bithumb, Bittrex, Bitflyer, and GDAX.

Bitcoin’s weekly and daily charts are not looking that great as red candles continue to dominate. The two Simple Moving Averages (SMA) crossed paths during the late evening of November 10. Now the long-term 200 SMA is well above the 100 SMA, indicating the road back to the upside is a long ways away. So far bitcoin’s price has corrected to levels bulls obtained on the first of November. Both the Relative Strength Index (RSI) and Stochastic oscillators have been heading south for hours, confirming bitcoin’s bear market might be just getting started. Order books show consolidation could happen in the $6,300-6,400 region as there is some good temporary support in that zone. After that, we could see a bounce back to $6,600-6,700 if buyers manage to take the reigns. If prices continue in bear mode, then a price below the $6K region could be on the cards. The key zone to watch is if the Displaced Moving Average (DMA) breaks $6150. If it does the downward push will likely follow suit. 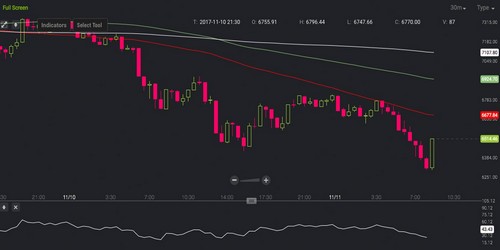 Digital asset markets, in general, are following bitcoin’s drop except for bitcoin cash, ethereum classic, and tether. Ethereum (ETH) markets are down 3.4 percent, currently averaging $298 per ETH. Ripple (XRP) markets are down 1.4 percent reaching a low of $0.20 per coin. Lastly, the fifth highest digital currency market cap held by litecoin (LTC) is down 3.2 percent as one LTC is $59 per token. Bitcoin dominance among the entire $197B cryptocurrency market cap is 53 percent, dropping from its previous high of 60 percent. One notable spike this weekend comes from ethereum classic markets which have seen ETC rise by 25 percent.

Bitcoin cash (BCH) markets have been on a tear all week long and even more so after the Segwit2x hard fork was canceled. BCH trade volume has surpassed BTC’s volume at $5.2B worth of BCH trades over the past 24-hours. The currency’s market cap is commanding $20B right now, and is just $8B away from knocking ethereum out of the second highest position. The top exchanges swapping bitcoin cash this weekend include Bithumb, Bitfinex, Bittrex, Coinone, and Korbit.

BCH weekly and daily charts show the bullish momentum is strong but could see a slight correction in the short term. In contrast to BTC charts, the Simple Moving Averages for BCH are opposite. The 100 SMA is above the long-term 200 trendline, indicating the upside swing is not over just yet. However, RSI and Stochastic trends are showing oversold conditions as we speak and some resistance may lead to some temporary pullback. Order books show a nice floor in the $900-1,000 range if BCH markets see some sell-off. If BCH bulls manage to break resistance above the $1,200 region, then some smooth sailing to $1,350-1,450 could be on the cards. 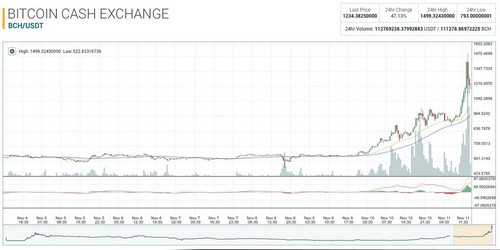 Overall the cryptocurrency community is focused on the intense market action happening all across the boards. Since the hard fork was allegedly canceled, global cryptocurrency markets have gone haywire. Most of the digital assets besides bitcoin cash and ethereum classic are in the red seeing market losses. Over the past 72 hours, BCH markets have increased by 57 percent, showing a thrilling correlation between BTC markets. The upcoming week should be interesting to see if the Segwit2x fork still happens with a rogue group of miners, and the introduction of bitcoin gold markets into the overall cryptocurrency market cap. Bitcoin gold (BTG) futures are up 55 percent, averaging $285 per BTG this Saturday. Cryptocurrency markets going forward will likely see some more volatility over the course of the upcoming week.