Bitcoin markets over the past week have seen some phenomenal energy and the past three days has been a thrilling run.

Also read: Bitpico Claims Segwit2X is Still Alive Despite All Evidence to the Contrary

Action across bitcoin markets have been all over the place. For instance, on Tuesday, November 7, the price dipped below the $7K zone and rebounded back above that territory a few hours later. The very next day on November 8, immediately following the announcement that Segwit2x was canceled, bitcoin’s market value spiked to a high of $7,900 per BTC. The peak didn’t last long, and the price per bitcoin has been hovering between $7,100-7,450 over the course of the past 12-hours. The last few days bitcoin has been trading over $3B a day in 24-hour trade volume, but on November 9 the decentralized currency swapped over $5B in BTC trades. Presently, bitcoin’s value is trading at $7,150-7,210 across a variety of global exchanges. 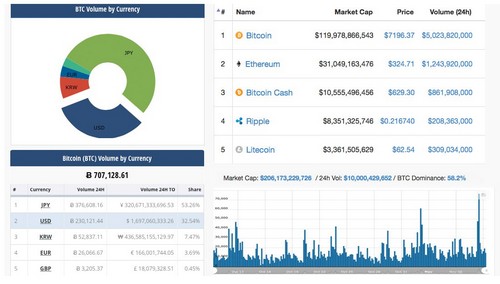 As far as trade volume is concerned, Japan is still leading the pack, but not as much as it has been since our last markets update. In our last update, the yen was commanding over 60 percent of the market, but that statistic has dropped to 53 percent. The USD/BTC pair has increased significantly by capturing 10 percent more volume by currency this week at 33 percent. Most of the massive volume is currently being swapped between ten exchanges who are trading above $100M+ in bitcoin trade volume daily. The top five exchanges with the highest trade volumes worldwide include Bitfinex, Bithumb, GDAX, Bitflyer, and Bitstamp.

Charts and technical indicators have been crazy since the canceled fork announcement and watching order books, and significant price swings can make you dizzy. After yesterday’s quick rally to the $7,900 territory, the value of bitcoin has been extremely volatile swinging back and forth both ways by 2-5 percent. Presently, the 100 Simple Moving Average (SMA) is just a hair above the long-term 200 SMA as they only crossed just a few hours ago. This indicates some short-term consolidation needs to happen before bulls try to break to the upside. The Relative Strength Index (RSI) started moving south last night with the price following its lead. Stochastic indicates the same sentiment as more consolidation needs to happen before the next move upwards. 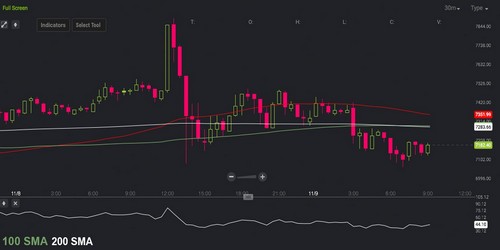 Looking at order books, there’s a bunch of resistance past the $7,500 zone, and at $8K there’s an extremely large sell wall. After some consolidation bulls could try to test the highs reached on November 8, but buy pressure from the fork is exiting as we speak. If the price continues to head south, then there are some strong foundations between $6,900-7,000 and a more prominent drop will stop temporarily at 7,700 as there’s some decent support there as well.

The Rush to Get Cheap Coins

Most of the other digital asset markets right now are seeing 5-30 percent gains. Many traders are picking up cheaper digital tokens that lost value when people were moving back into bitcoin, and now those coins are seeing some action. Ethereum (ETH) markets are up 8 percent as one ETH is hovering around $319. Bitcoin Cash (BCH) is coasting along at $630 per BCH but has dipped about 0.8 percent. Ripple (XRP) is up 3 percent with one XRP valued at $0.21 per token. Lastly, the fifth highest market cryptocurrency cap held by Litecoin (LTC) is up 0.88 percent as LTC is $62 per coin. Some notable spikes from other digital assets includes NEO which is up 20 percent and IOTA, that increased by 30 percent.

Overall cryptocurrency enthusiasts are still in shock that Segwit2x was canceled, and the discussion can be seen all over the web. The price staying above $7K is giving traders some optimism that the value can still hold when fork buy pressure dies down. Many bitcoin proponents are also waiting for the two largest futures exchanges in the world to start offering bitcoin exposure to mainstream investors. Some believe these moves by CME Group and Cboe will help create a solid foundation for bitcoin-based exchange-traded funds (ETF) and bolster bitcoin’s value in the future.

Bear Scenario: A key zone to watch right now is the $7K region, and if support breaks there then prices between $6,800-6,900 will likely happen. If panic selling ensues, then bears could push markets further into the $6,700 territory. At that vantage point, there is a solid foundation that should hold steady for a reasonable period of time.

Bull Scenario: The upside tempo is still looking good at the moment and trade volume is exponentially vast. Traders are making quite a bit of profits between these swings as smart intra-range players and day traders are likely enjoying this week’s run. Price highs could get back into the $7500-7600 region, but its going take some work. Above $7600 will see some smooth sailing up until the 7900-8000 region where traders should expect a second wind of sell-off.