The price of bitcoin dived on November 6 after reaching an all-time high of $7,590 across global exchanges. The decentralized currency’s value dropped to the $6,950-7,000 range. At the moment, the cryptocurrency’s market is consolidating above the $7K territory after the late afternoon sell-off.

What a difference a day can make in the land of bitcoin markets. Yesterday on November 5 bitcoin reached an all-time high (ATH) $7,590, but has since taken a 7 percent loss on November 6 which started around 1 pm EDT. Bitcoin’s market capitalization has shaved off a few billion as BTC currently commands a little over $116B. Even though bitcoin’s price corrected a touch, trade volume is exponentially high as there’s been over $3B worth of 24-hour global trade volume during each day of the week. Since the slump bitcoin’s market share dominance compared to all the other crypto-assets is still above 60 percent, but it may not last if the price drops further. Every cryptocurrency throughout the top fifteen highest crypto-caps, other than bitcoin (BTC), is in the green and up 2-15 percent.

The first week of November belongs to the Japanese yen again as far as capturing the leading bitcoin volume by currency. The yen is followed by the USD, KRW, EUR, and BGP capturing the most bitcoin trade volume right now. The top five exchanges by volume on November 6 are Bitfinex, Bitflyer, Bithumb, GDAX, and Bitstamp. 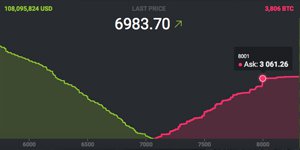 Currently, bitcoin markets are trying to consolidate in the $7K-7,150 region, but bearish sentiment has set in as the currency lost $500+ in the last 6-hours. A few days ago oscillators had shown a few slight pullbacks were taking place as bulls started feeling some exhaustion. At the moment buyers have stepped away to gain new positions after last week’s meteoric rise. Even though bitcoin markets had dropped a solid eight legs down, the 100 Simple Moving Average (SMA) is still holding above the long-term 200 SMA. Basically, this means bulls are taking a temporary rest, and the upswing will continue after some short-term consolidation.

Stochastic has been heading south, confirming overbought conditions, but at the moment the Relative Strength Index (RSI) is meandering sideways. Order books show some foundations in the $6,800-6,900 range if bears pull markets down more. Additionally, looking at the other side order books reveal some resistance again at $7,400-7,550, but the biggest wall is $8K. Bitcoin prices could easily spike back to newer ATHs and above the $8K zone before the fork, but a correction in the meantime was to be expected. 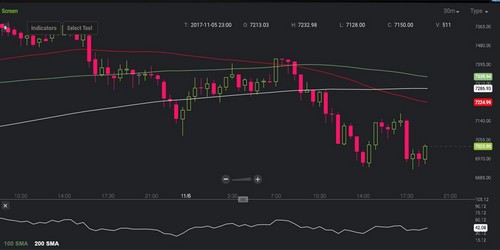 Bitcoin markets have already been experiencing some nice swings back and forth. Cryptocurrency proponents are steadily preparing for the upcoming Segwit2x fork which hasn’t affected the market negatively so far. Just like the August 1 bitcoin cash hard fork, the price is actually seeing some more significant buy pressure. Another thing that may be helping the price is CME Group’s recent bitcoin futures markets announcement. According to CME, the BTC futures exchange will be launching on November 14. Being the largest FX exchange worldwide CME’s new exchange has brought some optimism that bitcoin is being embraced by the mainstream.

Moreover, the notorious Goldman Sachs markets team ‘Elliott Wave Theorist,’ Sheba Jafari, has some more predictions up her sleeve. Jafari sees a target of $7,941 according to her weekend notes meant for private investors. The analyst has become well known because she has seen some of her forecasts come true while other times she’s been way off the radar. After the $7,900s Jafari notes some consolidation will take place “before continuing higher.” 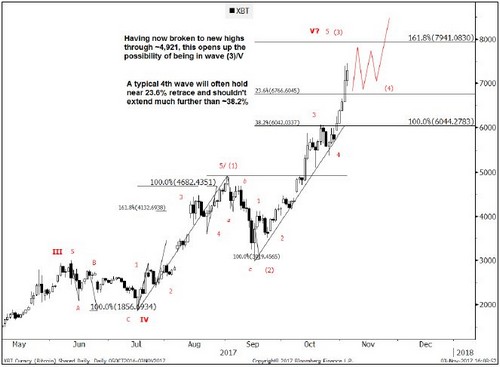 Even though bitcoin markets dropped, traders seem relatively positive and enthusiastic right now. A good amount of traders believe the price could spike past the $8K region before the fork, but no one knows what will happen to markets during or after the Segwit2x. For the next 8-10 days, market enthusiasm will likely override uncertainty, but it might not last after that vantage point.

Bear Scenario: If a sell-off continues to capture the market then we could see a low around $6,800-6,900. Breaking those two key zones with added panic-selling prices could see prices between $6,600-6,700, but it doesn’t look likely. Bearish sentiment is gripping the market at the moment, but it seems like a temporary pullback.

Bull Scenario: Once again bulls are playing musical chairs to find better positions during the sell-off. Price should jump again after some consolidation above the $7K zone. Prices close to or above $8K before the fork are still in the cards, and we could see wide price ranges between $7,700-8,200. Fibonacci trendlines at 61.8 percent show an upward rally towards $8,200 is possible pre-fork.

The Mt. Gox Redemption: Heading Toward a Happy Ending?

Crackdown On Bitcoin In UK Over Money Laundering, Tax Evasion 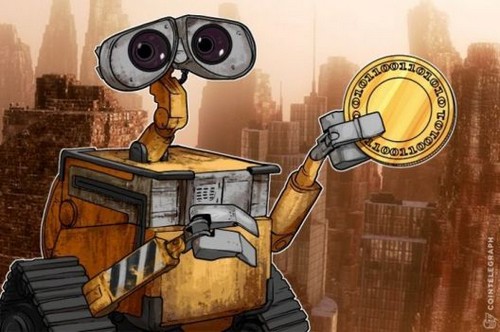