This week the well known Canadian digital asset exchange, Coinsquare announced its plans to launch an initial public offering (IPO) hoping to raise $150 million CAD ($120Mn USD). Coinsquare hopes the funding will help the platform be a direct competitor with cryptocurrency brokerage services like Coinbase and other U.S. based exchanges.

The Toronto-based digital currency platform Coinsquare has seen enormous growth over the past year, according to the company. The exchange considers itself a “coin management system” that enables the trading of cryptocurrencies like bitcoin core, ethereum, bitcoin cash, dash, and litecoin. The company was founded in 2015 by Virgile Rostand, and in 2018 the platform has acquired over 100,000 verified users. Coinsquare has been swapping roughly $10Mn USD worth of BTC, BCH, LTC, and ETH on a daily basis.

Now the firm is shooting for a $120Mn IPO in order to expand the company’s resources overseas. Coinsquare will sell its IPO shares on the Toronto Stock Exchange (TSX) in order to gain much broader attention. This is in contrast to much smaller cryptocurrency focused businesses in Canada utilizing a reverse takeover (RTO) scheme to be listed on the stock exchanges’ smaller subsidiary TSX Ventures.

“We’re racing, but racing to do it right,” Coinsquare’s Chief Executive Officer Cole Diamond stated in a recent interview.

We’re going to take the old-school route as an IPO to the Toronto Stock Exchange. 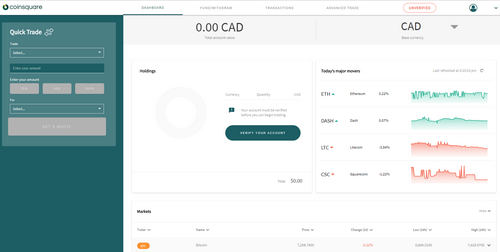 Coinsquare Hopes to be a Strong Competitor to Coinbase

The Canadian exchange plans to expand to other countries like the U.S. and UK by the second quarter of 2018. Additionally, the company announced plans to list ripple (XRP) this February, and each following month the platform will list one digital currency per month. Coinsquare thinks the expansion will help it compete with much larger exchanges in the world.

“The United States and the U.K. market are next,” Diamond explains. “We believe that we will be a strong competitor to Coinbase and other exchanges in the U.S. by the end of the year.”

Being a competitor against the San Francisco based exchange Coinbase will be a tall task for Coinsquare, but the company thinks the expansion and IPO will help. Just recently Coinbase raised $100Mn creating a $1.6B valuation for the firm, and has also begun listing more coins. Additionally, this past December the Coinbase president, Asiff Hirji, said in an interview that the company would likely go ‘public’ some day. “The most obvious path of Coinbase is to go public at some point, but there’s a lot for us to do between now and then, whenever that date is,” Hirji hinted in 2017. Coinsquare’s IPO just may give it a competitive edge against brokerage giants like Coinbase by enabling the company’s growth through public investment.