Reports of 2X’s death have been greatly exaggerated. That’s according to a statement issued by little-known mining group Bitpico. In a defiant message that appeared on a mailing list, Bitpico claimed to control 30% of the network hashrate and to be pressing ahead with the B2X fork regardless.

The message posted by Bitpico raised the prospect of Segwit2x being resurrected within hours of being laid to rest. The original statement halting the proposed fork to the bitcoin network, signed by Mike Belshe and five other major backers, unequivocally said:

We are suspending our plans for the upcoming 2MB upgrade.

Bitpico elected to ignore this memo however, averring that they would press ahead with the hard fork nevertheless because “everything is set in motion”. They continued:

Backing down the difficulty right now is a strategy. Wonder why 30% network hash-rate disappeared? It’s ours; the miners that will continue what is set in motion. A handful of humans cannot stop what they have no control over.

The audaciousness of the claim garnered a lot of attention, and opened the door to the intriguing possibility of Segwit2x living on. Closer scrutiny of the little-known Bitpico group reveals a few anomalies however. In particular, their claim to control 30% of the hashrate doesn’t appear to hold up.

Who the Hell Are Bitpico?

No sooner had the name #BitPico begun trending on Twitter than the group’s statement was picked apart and their very identity called into question. It was pointed out that there is little evidence of Bitpico’s existence prior to September of this year, and their claim to own a significant proportion of hashing power seems fanciful to say the least. As Wikipedia might put it, “citation needed”. 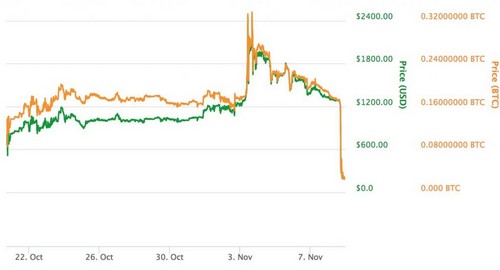 Regardless of who Bitpico is/are, what’s beyond dispute is that the last-minute cancellation of Segwit2X has created winners and losers. This latter group would have to include those traders who were boldly snapping up B2X futures until a day ago for as much as 0.1 btc. Segwit2X futures crashed by over 85% upon news of the fork being called off. For traders who were long on B2X, Bitpico’s proposal may present a get out of jail card, or at least the hope of some kind of redemption.

Critics of Bitpico’s proposal to revive Segwit2X were swift to attribute the group’s motivation to a black hole they may have futures traded themselves into. Leading up to the proposed split, a number of traders confidently snapped up B2X futures, going so far as to boast of their investment and its likely success.

On a day that was high on drama for everyone in bitcoin, Bitpico’s statement, which was posted from a Microsoft iCloud address, added another delicious twist to proceedings. Following the cancellation of Segwit2X, numerous exchanges announced that they were monitoring the situation, with Coinbase tweeting that they would “provide an update in the coming days”.

While the vast majority of individuals in the bitcoin community welcomed the abandonment of Segwit2X, there are still those who see the fork, with its promise of bigger block sizes, as an opportunity lost. Bitpico may have been genuine or may simply have been trolling in a bid to spread further FUD. One thing’s for sure: theirs won’t be the last attempt to try and push through another hard fork.