Bitcoin cash price is gaining pace above $600 against the US Dollar. BCH/USD broke an important resistance and eyeing further gains.

There was a correction initiated in Bitcoin cash price recently from the $685 swing high against the US Dollar. The downside move was protected by the $580-600 support area and later the price started an upside move. The best part was the fact that the price completed a correction successfully near $580 and likely to continue higher. During the upside move, the price was able to break the 38.2% Fib retracement level of the last decline from the $642 high to $580 low.

Moreover, yesterday’s highlighted connecting bearish trend line with resistance at $610 was broken on the hourly chart of BCH/USD. It has opened the doors for more gains since the price is now well above $600. The pair is approaching the 76.4% Fib retracement level of the last decline from the $642 high to $580 low. A break above the $630 level would open the doors for a move towards the $650 level. 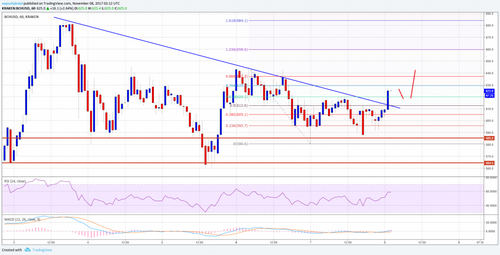 Any further gains should call for a test of the $700 level in the near term. On the downside, an initial support is at $600, which can be seen as a buy zone.

Looking at the technical indicators:

Hourly MACD – The MACD for BCH/USD is gaining momentum in the bullish zone.

Hourly RSI (Relative Strength Index) – The RSI for BCH/USD is heading higher and is currently well above the 50 level.