Bitcoin has formed lower highs to trade below a descending trend line on its 1-hour chart. Price is currently testing this resistance and is deciding whether to make a bounce or a break.

The 100 SMA is below the longer-term 200 SMA to suggest that the downtrend is more likely to resume than to reverse. Applying the Fibonacci retracement tool on the latest swing high and low shows that the 61.8% level lines up with the trend line and appears to be keeping gains in check.

In that case, bitcoin could still resume the drop back to the swing low around $3,650 or even make its way further south. RSI is already in the overbought zone and looks ready to turn lower to signal the return of bearish momentum.

On the other hand, a break past this near-term resistance could lead to a climb to the next area of interest around $4,400-4,500 near the 100 SMA dynamic inflection point. A move past this area could confirm that bullish momentum is gaining more traction. 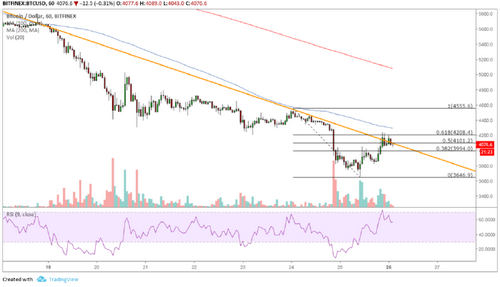 Bitcoin has lost nearly 40% of its value over the past few days but has since pulled up quite well from the record lows. Many are hopeful that this could be the bottom, but it would likely require a strong positive catalyst to sustain a rally.

At this point, FUD remains a dominant sentiment and further declines could wind up discouraging big banks or funds from piling on institutional investments even with platforms set to be launched. Now these inflows are being seen as the main factor that could spur a big rebound early next year, but even that seems to be a long stretch.

Still, there is some opportunity for bulls to keep defending lows as price drops, offering opportunities to jump in at bargain prices. Of course if bitcoin is overtaken by other rivals due to this slide, there could be more outflows seen.