Bitcoin is a fascinating network of verification nodes all working together to secure the blockchain, and its tethered sets of consensus proofs. At the moment, the network is pretty secure, but there are concerns it can be attacked in the future or blocked by things like firewalls, ISP gateways, governments, and telecommunication monopolies. During the scaling conference this past weekend, researchers Nick Szabo and Elaine Ou explain how the Bitcoin network could be broadcasted utilizing “Weak-Signal-Propagation” through radio broadcasts. The two researchers are currently testing and developing the radio-based platform. 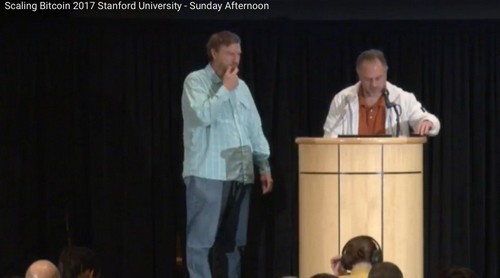 “Our goals are long-range broadcasts, and mesh relay, and you want to allow censorship resistance participation in the network — You want to send short messages in particular,” explains Szabo. “To do this, we are going to propose using skywave communication using the ionosphere where the sun hits the upper atmosphere of the earth near space with ultraviolet radiation — the layer it ionizes particles and creates this layer that acts as a mirror for certain radio wavelengths like the kind we want to use.”

The radio community — the two regimes we are interested in, in the radio community it’s near-vertical incidence skywave, this is the 70 degree angle there, it’s nearly vertical. You get a range of about 5 or 600 km — The most reliable frequency are 40-80 m — That’s what we’re targeting. 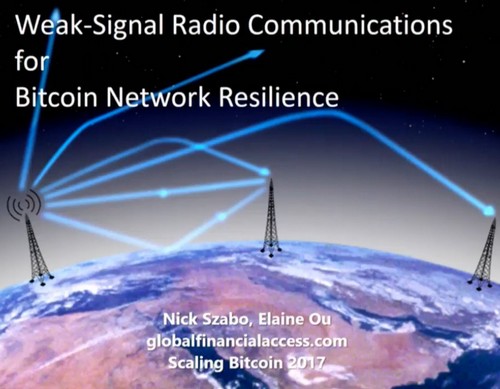 Following Szabo’s introduction to the project, he then gives the mic to Stanford University’s Elaine Ou, who reveals more about the protocol design and signal processing. The researcher explains any digital data can be transmitted over radio waves and her work focuses on binary phase shift keying. The decision to use phase shifting is because the technology confines bandwidth efficiently and keeps it out of the way of other communications. Elaine Ou details the team used a gnuradio flow graph to exemplify the modulator they used in testing.

“We set up a simple loopback test using 70 cm antennas for the transmitter, and we used a hacker RF one,” the Stanford researcher explains. “Then we ran the transmitter off of a 21Inc bitcoin computer — We didn’t know that the 21 computer was going to turn into a $400 paperweight, but we planned to package bitcoin protocol messages over radio.”

We did a loopback test and we added an additional block that injects gaussian white noise and we can estimate the expected bit error rate versus the signal-noise ratio.

The Kryptoradio Effort in Finland, and Radio’s Ability to Bypass Traditional Controls

Elaine Ou and Nick Szabo are not the first to introduce the concept of running the bitcoin blockchain over radio broadcasts. Back in 2013-2014, a project called “Kryptoradio” from Finland transmitted the bitcoin blockchain’s data over the DVB-T network. The DVB-T audio and video system is used by radio operators and television broadcasters all around the world. Kryptoradio’s project connected to the blockchain and transformed the transaction and blocks into a streaming broadcast. The project is no longer operational as the creator said it was initially run by Kryptoradio operators voluntarily, and it required more funding to continue. 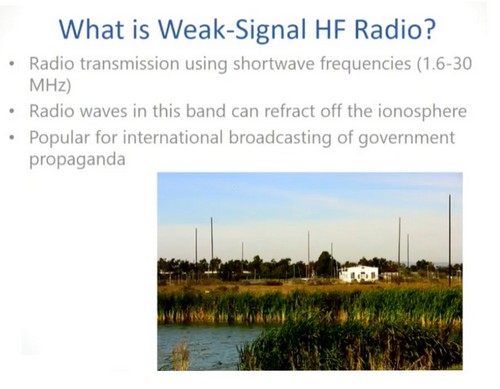 During the scaling conference, Szabo emphasizes that he believes the use of Bitcoin-based radio communications can help the technology jump over geographical borders, political boundaries, traditional legal systems, and telephone monopolies. Bitcoin users “won’t be happy,” Szabo details, if the protocol was blocked or deemed unusable due to denial-of-service attacks, router controlled attacks and more which could effect the network’s censorship-resistance benefits going forward.