Yahoo Finance’s,The Final Round, anchor Jen Rogers interviewed famed nonfiction financial writer, Michael Lewis. The author of classics in the genre such asLiar’s Poker and Moneyball (some are major motion pictures) was promoting his latest book now in paper. It examines market psychology, and really nothing so fascinates economic psychologists (also known as behavioral economists) as much as bitcoin.

“What about [the psychology of] bitcoin? Because, I think people are starting to feel, okay, is this real or is this …,” Ms. Rogers began. Mr. Lewis quickly interrupted, “Well, it exists right!”

She continues, “Well, but now we have more people coming out, commenting on it that are, you know, real thinkers that aren’t telling us this is a fraud — although we still have Jamie Dimon and Warren Buffett and all those people. But we have a lot more coverage coming from Wall Street. We have the CME coming out with the futures contract. So what are you thinking about bitcoin?” 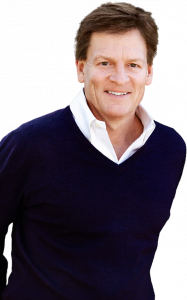 “There’s definitely a link between whatever bitcoin is doing and the chaos in the federal, in the US federal government,” he emphasized.

Mr. Lewis, who is contributing editor at Vanity Fair, earned a Masters from the London School of Economics, and worked as a bond trader at Salomon Brothers, considered writing about bitcoin.

As the interview continued, he pivoted to his own bitcoin story.

“I thought a couple of years ago I was going to write about it. I just wanted to understand it, you know. So I got invited down to a den of bitcoin enthusiasts in Silicon Valley, and I went and spent part of day, trying to understand, see if there was something there. And I wanted to know, like, am I going to be able to spend this stuff? And they said, ‘Absolutely, your future is right here in Palo Alto. We can go over and buy a cup of coffee with bitcoin.’ And I said, ‘Really? I didn’t know you could do that.’ And they said, well, put — well, they gave me an app that was a wallet, and they transferred five bucks worth of bitcoin onto my phone,” Mr. Lewis explained.

“I hope you kept the five dollars,” Ms. Rogers laughed, “because it’d be worth something now!”

“No, hold on,” Mr. Lewis waved her off. “So we went over to the coffee shop, right. And with all these guys who were bitcoin experts. And of course it didn’t work. Like, we’re scanning the phone, the people behind the counter said, ‘We don’t take bitcoin.’ And it was just like a disaster. So I said, ‘So why don’t you call me when I can buy something with bitcoin, and maybe I’ll write about it then. And I kept the five dollars on my phone.”

“And how much is it worth now?” Ms. Rogers demanded.

“378 dollars,” Mr. Lewis smiled. “So, it’s sitting there. My bitcoin is now more valuable than my phone!”