Over the past year or so there’s been a lot of discussion concerning ‘attacks’ on the Bitcoin network. Across forums and social media, the subjective valuations from bitcoin proponents of what an ‘attack’ on the network really is has become an extremely contentious topic.

The Amplification of ‘Bitcoin Attacks’

In the early days, bitcoin enthusiasts occasionally talked about network attacks, typically discussing things like the 51 percent attack, quantum computer strikes, or an extreme denial of service onslaught from some central bank or government entity. However, these days the word ‘attack’ is used a bit more loosely than ever, as the scaling debate has made people believe almost everything is a Bitcoin network invasion.

For instance, when other development teams decided to create alternative clients, some individuals within the open source bitcoin community said that alternative implementations were offensive. Another example is when one side of the scaling debate told the other side to “go ahead and fork,” and they did, but were then considered ‘attackers.’ Further, the ASIC Boost controversy this year was also deemed an attack by some, while others believed it was merely mining hardware optimization.

This week was no different with the rising price of bitcoin cash and the legacy chain’s network congestion. One Reddit post exemplifies how lots of bitcoiners currently believe the network is under constant attack. The Redditor /u/logical states:

Spam transactions galore; fud on every crypto Reddit; hash power temporarily drained off to bitcoin cash. Honestly, we’ve seen every one of these before. Nothing is different.

What is the Biggest Threat Bitcoin Will Face?

Another discussion concerning the topic of attacks came from the bitcoin luminary Andreas Antonopoulos over Twitter. After a large swathe of individuals were shouting that this weekend’s bitcoin cash price rise was an ‘attack,’ Antonopoulos explained that he thinks BTC and BCH will “coexist.” However, one bitcoiner told Antonopoulos that he should speak up about the “biggest threat bitcoin faces,” and go after the “bad actors.” Antonopoulos disagrees with the biggest threat statement, and responded by saying:

This is not even close to the biggest threat Bitcoin faces and I won’t be feeding the drama, distracting from the important work that needs to be done. 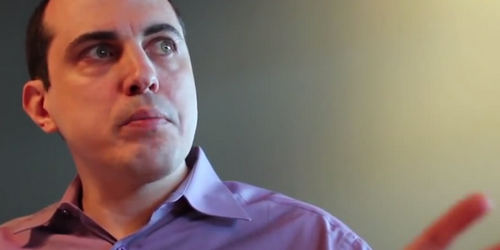 Following the opinions expressed by Antonopoulos, a Reddit user created a chart that describes a vast quantity of possible bitcoin network attack scenarios. There are three main categories of invasion that include slowing down BTC adoption, attacks on bitcoin’s efficiency and infrastructure, and delaying bitcoin development. These classes are then broken down into subsets like legal attacks, cyber warfare, as well as PR, Financial, and Hybrid attacks. The chart has approximately 40 attacks that the creator says are either ongoing or could happen in the future. The chart further shows the probability of the attack over the next ten years, and the possibility of damages in a low, medium, and high scale. 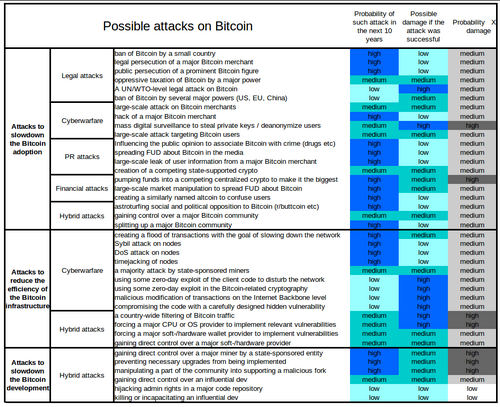 Ever since bitcoin was first unleashed, there has been worry about central banks, governments and crony corporatism trying to infiltrate the decentralized currency’s network. However, as the bitcoin market captures a market capitalization of over $100 billion, and the growth of mainstream adoption becomes more apparent, network participants are growing more paranoid about attacks.

Lately, much of the paranoia seems to be stemming from the scaling debate that’s been ongoing for years and the blowback of network participants not being able to come to consensus. Whether these attacks are legitimate concerns or not has been the biggest question at hand these days, as some skeptics believe some people are just crying ‘wolf’ for no reason.

This Week in Bitcoin: An End to 51% Attacks and Who Controls Bitcoin?